Dele Alli proved he has his mojo back as he scored a stunning overhead kick and provided two assists to send Tottenham through to the Europa League last 16 in a 4-0 second-leg win over Wolfsberger.

Alli has had a season to forget having been frozen out by boss Jose Mourinho, but enjoyed the best night of his reintegration to the squad following a failed January transfer window exit.

The England international produced a superb goal and then set up Carlos Vinicius, who added a late second, and Gareth Bale as Spurs made it through to Friday's draw for the next round with an 8-1 aggregate win.

There is some mitigation in the fact he was playing against the lowest-ranked opposition left in the Europa League, but it is a big step forward and he could yet have a big impact this season.

Mourinho, who remains under pressure following a dismal run of Premier League form, has targeted winning this competition as a route into the Champions League and will be hoping the draw is kind to him as there are no seedings or territorial restrictions, meaning the likes of Manchester United or AC Milan could be opponents in the next round.

If Spurs are to win the competition Mourinho might need some more moments like the one Alli produced on Thursday.

Alli has always been capable of the spectacular with memorable goals at Crystal Palace, Chelsea and Manchester United among a strong highlight reel, and in the 10th minute he produced a new addition. 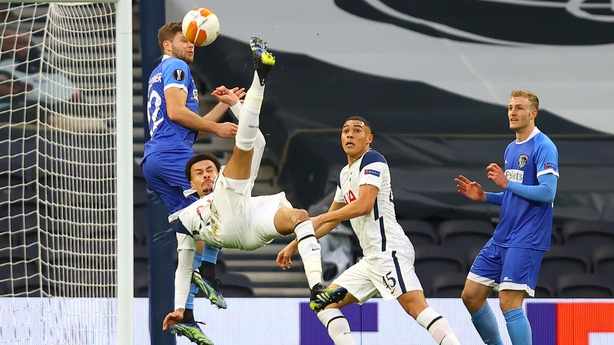 With his back to goal around 15 yards out, his control from Matt Doherty's fizzing cross saw the ball bounce above his head and he waited for it to drop before sending an overhead kick looping into the far corner.

That moment of brilliance lit up what was an otherwise drab half, which Spurs dominated but could not find a way through.

It was not until the final few minutes of the opening 45 that they had chances to go further ahead.

Vinicius headed over a good chance at the far post and then saw an even bigger chance go begging as, after being played in by Erik Lamela, he expertly rounded goalkeeper Manuel Kuttin before seeing his shot cleared off the line by Gustav Henriksson.

The Brazilian, who is used almost exclusively in this competition, finally got on the scoresheet five minutes after the restart and Alli was involved again.

The midfielder sent in a curling cross that was perfect for Vinicius, who peeled off to the back post to head into the bottom corner.

Alli can look to Bale as an example of someone who has grown into the season as the Wales international's resurgence continued with a fine goal in the 73rd minute - four minutes after coming on. 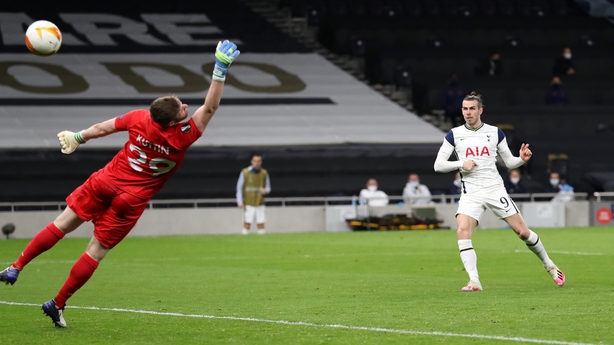 Alli was again the provider with the perfect pass for Bale to fizz home a first-time effort that went high into the net.

Vinicius' night got better in the final 10 minutes as he lashed home his sixth goal of the competition after 16-year-old Dane Scarlett robbed Henriksson of possession.