Tottenham boss Jose Mourinho insists he is still one of the best coaches in the world despite his side's alarming Premier League slump.

A 2-1 loss at West Ham on Sunday afternoon was their fifth in six league matches and sees the pressure building on Mourinho, who is on one of the worst runs of his long managerial career.

Tottenham's demise has been stark as from a position at the top of the table in mid-December they have won just three of last 13 games, meaning their hopes of qualifying for the Champions League through the league are all-but over.

They were undone by goals in either half from Michail Antonio and Jesse Lingard, thanks partly to more defensive mistakes, with Lucas Moura's second-half header getting them back in the game.

Mourinho is often accused of being out-dated, but was bullish when asked whether he questioned his methods amid the poor run of form.

Asked what gave him so much confidence in his ways, he added: "Because sometimes the results are the consequence of multiple situations in football and mine and my coaching staff's methods are second to nobody in the world."

The current run of form is far worse than the results which saw Mauricio Pochettino sacked in 2019.  But Mourinho says his club, who are nine points adrift of West Ham in fourth, are not in crisis and hinted that the Europa League will now be their priority as a ticket into next season's Champions League.

"I don't know what you mean by crisis," he said. "If crisis is frustration and sadness in the dressing room, I'd say so because nobody is happy and we all showed that in this game. 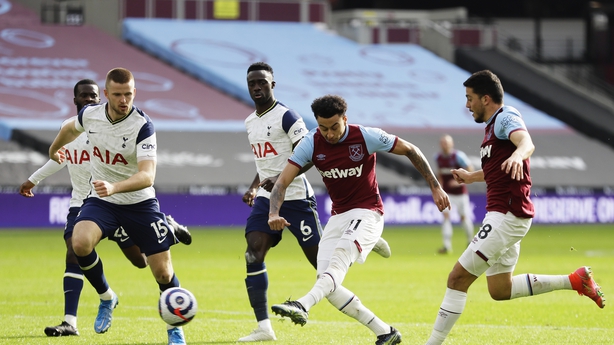 "When a team fights the way the team did until the last second, trying to get a different result, it's never a group crisis, because groups are in crisis when you're not together in the search for better results than you have.

"So I wouldn't say crisis, I would say a bad, a really bad run of results. That is obvious. We're losing too many matches.

Antonio struck from close range in just the fifth minute and then Lingard's third goal of his loan move, reinstated by VAR after being ruled out, doubled the Hammers' lead.

Moura's header gave Spurs hope and then they threw the kitchen sink in search of a leveller, but Gareth Bale and Son Heung-min both hit the woodwork.

The win sends the Hammers into the top four and gives them their highest ever points tally at this stage of a Premier League season.

Boss David Moyes is pleased with how the campaign is going and is daring to dream.

"To win this one today was really important because of the games we have got coming up," he said. "I said a few weeks ago if we could hang in there we could look at it further down the line.

"We are really excited by it because this time last year we were worrying sick because we were going to get relegated. So we are thrilled with it.

"But the thing for me is that we can play much better than we are doing and that is what excites me because there is more to come.

"We are are ahead of our station at this moment in time.

"We have done half the job, let's see if we can finish the second half.

"Where does it take us? I am really hoping we can get in one of the European competitions but if it doesn't and we finish outside it, I think it would be hard to say the players have not had a good year."