Dublin could still host Euro 2020 games this summer with UEFA unlikely to take up any offers from the UK to host the entire tournament.

According to the Times, the culture secretary Oliver Dowden "has signalled" to UEFA that crowds are expected back in UK stadiums before the rest of Europe due to progress on Covid-19 vaccinations.

Wembley Stadium is scheduled to host the Euro 2020 semi-finals and final in July and the government is reportedly now ready to take on more games due to be played across 12 different European cities, the Times said. 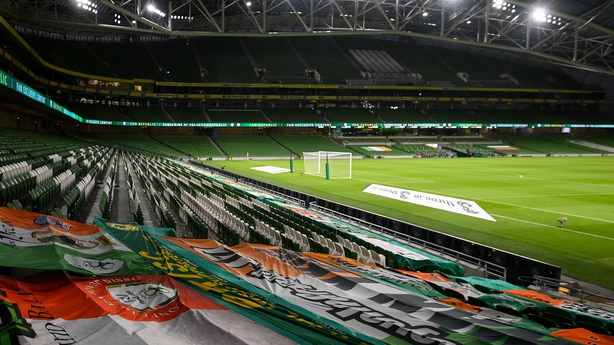 UEFA told the PA news agency it had nothing to add to a statement in January when it reaffirmed its commitment to hosting the tournament across the 12 designated cities at a meeting with the host associations.

And the governing body said last week that it would not be pursuing a similar offer from Israel to help with hosting Euro 2020 matches and other European club competitions.

In response to Israel's offer, UEFA said: "The Israeli FA did offer their facilities should UEFA need them this year.

"However, UEFA fully intends that all its events (including club finals and the EURO) will be staged in their intended venues and is working hard with its partners and stakeholders to secure that."

The Department for Digital, Culture, Media and Sport and the Football Association declined to comment when approached by the PA news agency.

Health secretary Matt Hancock was unaware of any offer to host the tournament, saying on Sky News: "I haven't seen anything on that, I understand that that's not right."

Euro 2020, originally scheduled to take place in June and July last summer, was postponed in March due to the coronavirus pandemic and rescheduled for June 11-July 11 this year.

The competition is scheduled to start in Rome on June 11, with the final at Wembley on July 11.