A freakish own goal by goalkeeper Illan Meslier gave Wolves a 1-0 home win over Leeds United in the Premier League and enabled them to leapfrog their opponents in the standings.

The goalkeeper unknowingly turned the ball into his own net after Adama Traore's second-half drive came back off the crossbar.

Mateusz Klich hit a post and Patrick Bamford had a goal ruled out for offside while Wolves keeper Rui Patricio twice denied Liam Cooper and smartly saved from Helder Costa in stoppage time.

Wolves recorded back-to-back victories for just the second time this season to go above Leeds into 11th and leave the visitors still searching for their 200th Premier League win.

Both sides played their part in an entertaining game from the start, with defeat harsh on Leeds.

Meslier then claimed another fierce long-range Neto effort but Leeds restricted their hosts to shots from distance and fashioned the first serious opening after 14 minutes.

Romain Saiss chopped down Bamford but a stooping Cooper could not get enough on Raphinha's free-kick and headed straight at Patricio.

It was the cue for the game to open up and Leeds fashioned another fine chance when Raphinha slipped in Klich. The midfielder's low effort ricocheted off the near post, Pascal Struijk's follow-up was saved by Patricio and Raphinha eventually fired wide.

Wolves responded immediately and Meslier parried Semedo's angled effort as the wing-back continued to probe down the right.

Semedo's threat would have concerned Marcelo Bielsa and Meslier needed to be alert to deny him again just before the break.

An open contest continued after the restart and Neto seized on Jack Harrison's loose pass to fire over as Willian Jose waited free in the box. 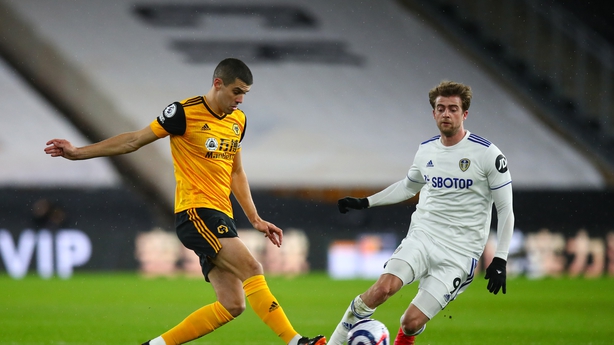 Yet, for Leeds, 12-goal Bamford - in front of watching England boss Gareth Southgate - was unable to make a serious mark as United struggled with their final ball.

Leeds' diminished threat allowed Wolves to take a degree of control but they too lacked the composure to find a breakthrough.

It almost cost them when Raphinha's whipped delivery was met by Cooper and his header was parried by Patricio, with Bamford's follow up smuggled away.

But the save proved crucial as Wolves instantly regrouped to grab a 64th-minute winner in fortunate fashion.

Traore eventually collected the ball on the left to comfortably shrug off Luke Ayling and barrel towards the area. The forward's 25-yard drive rattled the underside of the bar and the ball bounced out, hit Meslier on the back and rolled across the line.

Patricio saved from a stretching Cooper as Leeds sought a quick response and Bamford had an emphatic finish ruled out for offside.

Yet a leveller never came thanks to two smart stoppage-time saves from Patricio, when he denied Costa and turned Raphinha's header wide.