Cardiff's resurgence under manager Mick McCarthy continued with a fourth straight win courtesy of a 2-0 success at Luton.

Second-half goals from Harry Wilson and Will Vaulks ensured the visitors claimed all three points.

City's Wales international Kieffer Moore whistled an angled drive into the side-netting early in the second half, but the visitors then ensured all of Luton's good first-half play counted for nothing with 53 minutes gone.
On-loan Liverpool midfielder Wilson took aim from outside of the box and hammered a drive beyond Sluga and into the corner of the net for a wonderful opener.

Sluga denied Wilson a second with a brilliant save, turning his instinctive volley from a similar distance over the bar moments later, but from the following corner, Cardiff doubled their advantage after 56 minutes.

With Luton not getting enough distance on their clearance, it fell to the unmarked Vaulks and his volley whizzed past Sluga via a slight deflection to leave the hosts with a mountain to climb.

Pelly-Ruddock Mpanzu wasted a glorious chance to make it 2-1 after 68 minutes when he was teed up by Collins but he could only slice wide of the target.

Josh Murphy tried to make it 3-0 from range, only finding the gloves of Sluga.

Harry Cornick came off the bench for Luton to almost pull one back with seven minutes left, his shot deflecting off a trailing leg and going behind.

The Bluebirds tried to extend their advantage further, defender Perry Ng testing Sluga from 20 yards after being teed up by Joel Bagan. 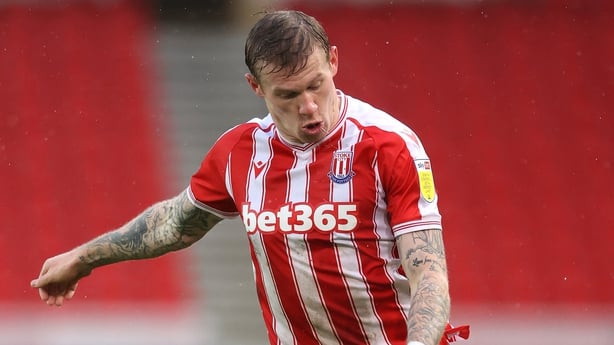 Stoke, with James McClean starting, notched their first win of 2021 when Steven Fletcher scrambled home the only goal of the game late on in a 1-0 victory over former club Sheffield Wednesday.

The Potters looked set to make it 10 league games without a win until the 84th minute when the veteran striker turned in a knock-down from a corner to sink the club he left last summer.

It was a deserved relief for Michael O'Neill's hosts who had dominated the second half and gone close though Joe Allen, Nick Powell and Fletcher.

It was Stoke's first league win in 10 attempts and has given their play-off hopes a boost, while Wednesday remain in the relegation zone.

Tom Ince then had an effort with the last action of the contest, but his low daisycutter was too close to Phillips as City moved closer to the play-off places.

Watford climbed to third in the Championship table as Joao Pedro earned and converted a penalty to make it back-to-back league victories with a win at Preston.

Middlesbrough claimed their first home win since mid-December as first-half goals from Duncan Watmore and Ashley Fletcher secured a 2-1 comeback win over Huddersfield.

An Isaac Mbenza free-kick fired the visitors into an early lead, but a superb solo goal from Watmore and a penalty from Fletcher ensured Boro were ahead at the interval.

Paddy McNair's late red card ensured Neil Warnock's side endured a nervy finale, but the 10 men held on to close to within three points of the play-off positions.

Defeat for Huddersfield means they have now gone nine games without victory in all competitions and are in serious trouble towards the foot of the Sky Bet Championship table.

Andre Wisdom struck in the fourth minute of stoppage time as Derby pulled further clear of the Championship relegation zone with a 2-1 victory at bottom side Wycombe.

The Rams are now six points above the bottom three following a fifth win in seven matches for Wayne Rooney's side, who survived a few scares at Adams Park along the way.

Uche Ikpeazu had earlier scored for both teams, converting a penalty to cancel out his first-half own goal, and the Chairboys can consider themselves unlucky to have come away with nothing for their efforts.

Daryl Horgan had the ball in the net for Wycombe after 14 minutes when he finished calmly into the bottom corner after being played in by David Wheeler's quickly-taken free-kick, but the offside flag had long since been raised - though replays suggested he was onside.

Lucas Joao and Michael Morrison ensured Reading returned to winning ways with a 2-0 victory over Bristol City at Ashton Gate.

But for the home side it was a sixth successive defeat and the end of the line for Dean Holden who lost his job as head coach afterwards.

Joao was allowed time to control Michael Olise's 42nd minute free kick from the right before coolly slotting his 20th goal of the season with a right-footed finish from eight yards.

And three minutes later Morrison exchanged passes with Joao on the edge of the box before eluding some weak challenges to force the ball past Daniel Bentley from close range.

Reading had opportunities to increase their lead after the break, while lifeless City barely created a worthwhile chance.