Republic of Ireland midfielder Megan Connolly excelled for Brighton and Hove Albion as they pulled off a shock 2-1 win at Women's Super League leaders Chelsea, who saw their 33-game unbeaten run brought to an end.

The Blues got off the mark early when Sam Kerr connected with an Erin Cuthbert corner in the fifth minute and headed past Megan Walsh.

It's straight in from the corner by @MeganConnolly4! ??#BarclaysFAWSL pic.twitter.com/foVyTnu5cW

The visitors were quick to respond, though, with Aileen Whelan thundering a header home from Connolly's corner.

Connolly then got on the scoresheet herself in the 78th minute when goalkeeper Carly Telford could only palm her inswinging corner into her own net.

Ellen White and Lauren Hemp were on target as Manchester City made it six straight wins with a 2-1 victory at Arsenal.

White's goal was her 55th WSL strike, moving her above Vivianne Miedema - who failed to find the target for the Gunners on Sunday - in the list of all-time leading scorers in the competition.

The 31-year-old England forward broke the deadlock 24 minutes in with a half-volley from inside the box, connecting perfectly with Chloe Kelly's cross.

Arsenal looked to have equalised after 37 minutes but Jill Roord's effort was deemed offside and City went in ahead at the break.

Roord was involved in the equaliser after the interval, however, setting up Caitlin Foord in the 57th minute.

But Hemp had the final say with a 79th-minute header - Kelly again with the assist - which extended the third-placed visitors' advantage over the hosts in fourth to seven points. 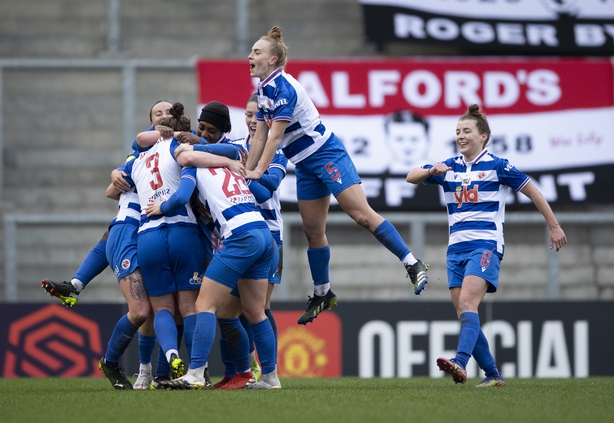 Manchester United passed up the chance to take over at the top as they went down 2-0 at home to Reading.

Everton were unable to close the gap on the top four as they were held to a 1-1 home draw by Birmingham.

Danielle Turner gave the hosts the lead in the first meeting between the sides this season after two postponements of the fixture, but Birmingham levelled through Jamie-Lee Napier at Walton Park.

West Ham and Bristol City also battled out a 1-1 draw.

The visitors took the lead in the seventh minute when Molly Pike's corner deflected into the net off West Ham's Emily Van Egmond, with Katerina Svitkova salvaging a point for the Hammers with a 49th-minute leveller.