Chelsea took another step in their recovery under new coach Thomas Tuchel when they beat bottom side Sheffield United 2-1 in the Premier League on Sunday thanks to a strike by Mason Mount and a penalty by Jorginho, with Germany's Timo Werner involved in both goals.

The away win - the third in four games since Tuchel replaced Frank Lampard - pushed the Blues up to fifth in the Premier League table, just one point behind out-of-form Liverpool who occupy the last of the Champions League qualification spots.

Mount set the Londoners on their way to victory two minutes before halftime when Werner sprinted free on the left and provided an inch-perfect cut-back for the England midfielder to convert with a first-time shot from 12 yards.

Sheffield United got back in the game when Chelsea defender Antonio Rudiger misjudged the position of his goalkeeper Edouard Mendy and tapped the ball past him into an empty net in the 54th minute. 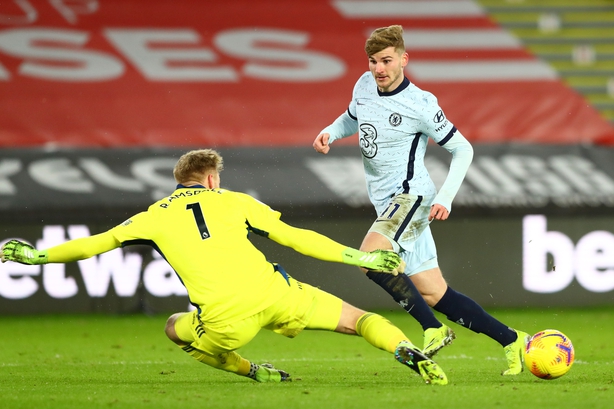 But Werner's pace immediately stretched the hosts once again as he raced on to a wayward pass and was brought down by Sheffield United goalkeeper Aaron Ramsdale for a penalty that was converted by Jorginho after 58 minutes.

Werner's role in the two goals represented another sign that the German is recovering his confidence although he has yet to score in the league since 7 November when he bagged a goal against Sheffield United at Stamford Bridge.