Harry Kane highlighted his importance to Tottenham as he returned from injury and helped them stop the rot by scoring in a 2-0 win over West Brom.

Kane had missed the last two and a half games after coming off with an ankle injury at half-time against Liverpool and things could hardly have gone worse for Jose Mourinho's men in that time as they were beaten in all three to lose ground in the race for the top four.

But the England captain made a quickfire return and put Spurs on their way against the Baggies with his 13th Premier League goal of the season, with Son Heung-min also finding the net in a much-needed win.

It is no surprise that the trusted duo of Kane and Son were the men to step up as between them they have scored 26 of their side's 36 league goals this season and it was timely too, as it helps Spurs get back on track ahead of a big week with an FA Cup fifth round tie at Everton preceding a trip to Manchester City next weekend.

West Brom had drawn at City and Liverpool but were always hanging on here and their fight against relegation is looking a forlorn one, sitting 11 points from safety. Spurs had been shot-shy in their previous two games without Kane, but they had a flurry of early efforts in the opening 20 minutes and could have taken a grip of the game.

Kane was the obvious catalyst and he had a number of them, but was unusually rusty in front of goal.

First he hit the stanchion after being set up by Serge Aurier and then rolled an effort wide after Tanguy Ndombele's through-ball set him clear.

He saw another effort blocked when he might have normally scored before testing Sam Johnstone's handling with a fierce shot at the far post.

It was a siege by the hosts and Johnstone had to make another fine save before the break to keep his side level, clawing away Aurier's header from a corner at the far post.

In the end, Mourinho's men almost went in at half-time trailing as a defensive slip gave West Brom their best opening. They made their way down the right and Davinson Sanchez left Mbaye Diagne unmarked, but the striker's header was saved on the line by Hugo Lloris. 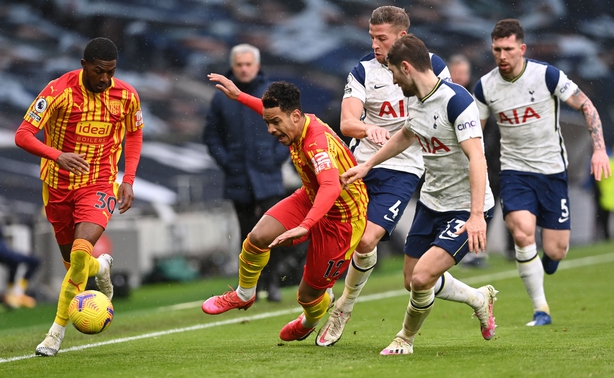 Son missed another chance within seconds of the restart as Johnstone's feet denied him from Kane's defence-splitting pass, but it was only a matter of time for Spurs.

The Baggies could not rely on Kane continuing to miss and so it proved in the 54th minute.

Pierre-Emile Hojbjerg found the striker in space with an accurate pass and Kane made no mistake with a low finish. It was his 20th goal of the season in all competitions and his 208th for Spurs, matching Bobby Smith as their all-time second-highest scorer.

Four minutes later it was 2-0 as Spurs hit West Brom with a devastating counter-attack.

The Baggies tried to mount a response and Diagne twice had goals ruled out for offside as Spurs ended their slide in comfortable fashion.