Defender Andy Robertson concedes Liverpool are not currently in the title race and warned that if they do not regain their consistency then qualifying for the Champions League is going to be a challenge.

Having gone unbeaten for almost four years at home in the league, Jurgen Klopp's side have now lost back-to-back matches at Anfield after Brighton repeated Burnley's 1-0 victory of a fortnight ago.

It left them seven points behind Manchester City, who also have a match in hand, and makes Sunday's visit of the Premier League leaders a must-win match for the Reds, who have failed to score in three consecutive home league games for the first time since October 1984.

"Any game against Man City is a big one but as this moment stands, we are not in a title race," said the Scotland captain.

"We're seven points off it and they've got a game in hand I think - I'm sure they would say the same if they were potentially 10 points behind us.

"We need to put in performances on a consistent basis, it's no good doing it one or two games in a row and then having a slip.

"That's what we need to get back to, starting Sunday. It's a big game, they're flying and playing really well just now.

"We don't turn into a bad team overnight and we'll be ready come Sunday but we need to be doing it on a consistent basis and not in one-offs." 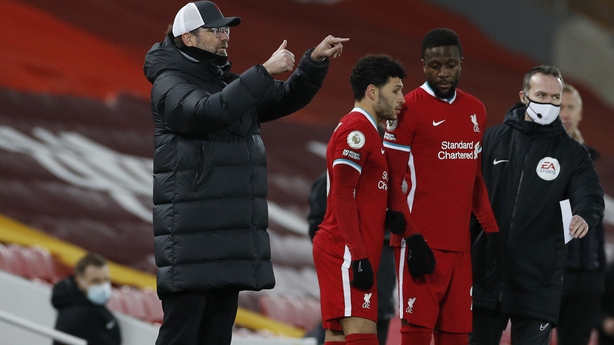 Liverpool's form against teams in the bottom eight this season has produced just three wins and four draws from nine matches.

Both Burnley and Brighton have managed to blunt their attack at Anfield without too much trouble.

Robertson accepts it is up to the players to change their fortunes at home.

"It's just not clicking. Maybe teams are sitting a bit more back against us at home and maybe they're a bit more open and expansive away, but they did that last season and we found a way to win and that's what we need to do," he told liverpoolfc.com.

"We need to be better at finding a way in the game. You can set it up in training, you can do everything in training, but when you cross the white lines you need to find a way to goal and we never did that."

Klopp has taken full responsibility for their poor run and accepts it is a problem he has to solve quickly.

"My job is to find explanations and to work with that then. I know how much better football these boys can play," he said.

"There might be two reasons. One is they don't want to, and I think even you would agree with me that that's probably not the case. So then why didn't it work?

"These are the things we have to figure out. I was involved in these two games, so it was tough for me as well."

An injury crisis which shows no signs of abating - goalkeeper Alisson Becker missed the match with a non-Covid-related illness - has had a hugely detrimental effect on the team's performances.

The loss of all three centre-backs, Virgil Van Dijk, Joe Gomez and Joel Matip, plus their back-up Fabinho has meant Jordan Henderson playing in defence, removing a key driving force from midfield.

Alisson and Fabinho are expected to return at the weekend but forward Sadio Mane, who has missed the last two matches with a muscle problem, remains doubtful.

Fellow forward Diogo Jota, who has been out for two months with a knee injury, is still a number of weeks away from fitness despite beginning outdoor training this week.