Dominic Calvert-Lewin got back on the goal trail as Everton held on to win at Leeds and climb up to fifth in the Premier League.

The striker notched his first goal in eight league games to take his tally for the season to 12 after captain Gylfi Sigurdsson had given the visitors an early lead.

The Toffees rode their luck after Raphinha pulled one back for Leeds soon after the interval, but held on to register a fourth successive away win in the league for the first time since 1985.

Leeds hit the woodwork twice and Carlo Ancelotti's side were also indebted to a superb triple save in the second half from goalkeeper Robin Olsen, who was deputising for the injured Jordan Pickford.

Several players lost their footing in the early stages, and throughout the match, on a playing surface which has been relaid since Leeds’ last home game against Brighton 18 days ago.

Andre Gomes’ excellent ball set Lucas Digne free down the left and the Frenchman’s cross was turned neatly home first time by Sigurdsson, who charged on to the ball between three static defenders. 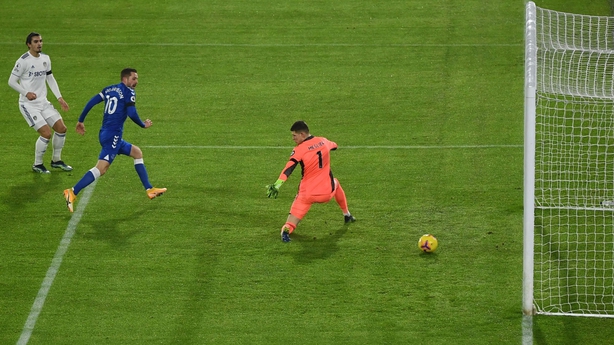 Leeds went close to equalising in spectacular fashion in the 20th minute when Ezgjan Alioski’s volley direct from Raphinha’s corner crashed back off the base of a post.

Olsen then denied Leeds again, tipping the ball over the crossbar after Pascal Struijk’s header from Kalvin Phillips’ free-kick had deflected off Calvert-Lewin.

For all Leeds’ probing, Everton continued to look menacing on the break, but it was from a set-piece that they doubled their lead four minutes before the break.

Sigurdsson’s corner took a deflection off Ben Godfrey’s shoulder and Calvert-Lewin stole in at the far post to head home and give his side a 2-0 half-time lead.

Leeds’ response after the restart was swift. Patrick Bamford teed up Raphinha after Everton had failed to clear the danger in their box and the Brazilian rifled home his fourth Premier League goal of the season.

The Sweden international kept out Mateusz Klich’s shot, then blocked Raphinha’s follow up and moments later kept out Jack Harrison’s swerving effort as Leeds cranked up the pressure.

Richarlison fired inches wide following his driving run at the other end as the action flowed.

Bamford’s header from Stuart Dallas’ cross looped on to the crossbar and as the home side laid siege on Everton’s goal, Luke Ayling’s stoppage-time shot was charged down by Everton substitute Michael Keane.