Leandro Trossard gave the relegation-threatened Seagulls a major boost in the scrap for survival by ending his 19-game goal drought to earn a 1-0 success.

Victory for Graham Potter's men was their first in 15 top-flight fixtures at the Amex Stadium and moves them seven points clear of the drop zone.

Spurs created little in the absence of talisman Kane, who suffered an ankle injury during Thursday’s defeat to Liverpool, and could have few complaints about a disappointing result which deals another major blow to their top-four aspirations.

Jose Mourinho’s men remain six points adrift of the Champions League places on the back of an alarming two league wins from nine matches.

Substitute Carlos Vinicius came closest to snatching a point for the visitors, while Gareth Bale – handed a rare start in Kane’s place – was ineffectual before being replaced in the 61st minute.

The defeat would have been heavier had Brighton's Irish forward Aaron Connolly not missed a golden chance to put the result beyond doubt six minutes from time. 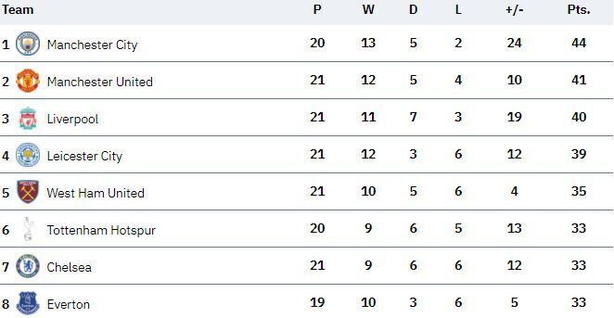 Tottenham were thumped 3-0 under Mauricio Pochettino on their last visit to Sussex and arrived this time having fallen out of title contention during a damaging past seven weeks.

Thursday's 3-1 loss to Jurgen Klopp’s champions left Mourinho’s men – who topped the table as recently as last month – with only nine points from the last 24 available, while also depriving them of leading man Kane.

The enforced absence of the England captain paved the way for Bale to make only his second top-flight start since his headline-grabbing return from Real Madrid as part of four changes, although he once again struggled to impress.

Mourinho also moved to tighten up his defence by bringing back Davinson Sanchez and Toby Alderweireld but his side were given a major wake-up call inside three minutes.

Pascal Gross was afforded time and space in the visitors’ box following neat interplay from Neal Maupay and Alexis Mac Allister before his effort with the outside of his right boot rebounded off the base of the left post.

Spurs failed to heed the warning and goalkeeper Hugo Lloris – who had become only the 25th player to make 350 appearances for the north London club – was soon picking the ball out of his net.

Gross was once again heavily involved, playing a delightful one-two with Mac Allister on the right-hand side before cutting the ball back for the onrushing Belgian Trossard to sweep home his first goal since September at the near post.

Disjointed Spurs continued to lack rhythm as they struggled to cope with the high tempo of the dominant hosts.

Increasingly influential midfielder Mac Allister was pulling the strings and he, Maupay and captain Lewis Dunk were among those to threaten a second before the break.

A wayward Steven Bergwijn strike was all the below-par visitors mustered in a dismal opening 45 minutes and they would have been grateful not to have fallen further behind as they trudged down the tunnel.

Mourinho attempted to inspire his side by introducing Brazilian forward Vinicius in place of centre-back Sanchez for the second period.

Yet the Seagulls continued to have the better of the play and remained the more dangerous.

France keeper Lloris – who suffered a serious elbow injury on his last visit to this ground – was required to keep out deflected efforts from Ben White and Mac Allister.

Seagulls keeper Robert Sanchez was finally called into meaningful action 15 minutes from time when he superbly clawed away a stinging, goal-bound effort from Vinicius.

Brighton should have been home and dry late on but substitute Connolly somehow directed his shot straight at Alderweireld with the goal gaping after being teed up Gross.

The remarkable miss mattered little in the end as Potter’s men survived a nervy finish to claim a much-needed first top-flight win on home soil since a 2-1 success over Arsenal on 20 June.