Azpilicueta's first goal in a year had the profligate Blues in charge at the break, before Alonso toasted his first Chelsea appearance since September with a smart finish at the death.

The Blues moved up to seventh in the table courtesy of just a third win in 10 league matches, with Tuchel tasked to launch another new era after Frank Lampard's sacking.

Azpilicueta's first goal since the 2-2 draw with Arsenal in January 2020 lit up the end of a drab first-half to ease Chelsea's prior struggles in finding the net.

But while the Stamford Bridge hosts got off the ground under their sparky new German boss, their #53million Germany striker Timo Werner's malaise continued.

Werner's crisis of confidence remains an unwanted fixture, with the 24-year-old's barren streak extending to just one goal in 17 appearances in all competitions.

The RB Leipzig summer recruit was to lurk just off the left wing in between the lines of a number 10 and number nine.

But just 45 minutes into that custom-built role, Tuchel changed tack.

For the second-half Werner was to play right through the middle, with Tammy Abraham withdrawn as the fall-guy as Chelsea tried everything and then some to rebuild Werner's shattered confidence.

Azpilicueta and Alonso came to the rescue, with Chelsea full value for the win but with plenty of work ahead for new man Tuchel.

Just as in the goalless draw against Wolves on Wednesday, Chelsea dominated territory and possession.

Despite tentative improvements though Chelsea still struggled for real bite, with Werner's hat-trick of scuffed efforts punctuating a poor first-half for the Germany star.

The 24-year-old had to score from Hudson-Odoi's drilled cross, but his miscue saw the opening evaporate on the bitter west London wind. 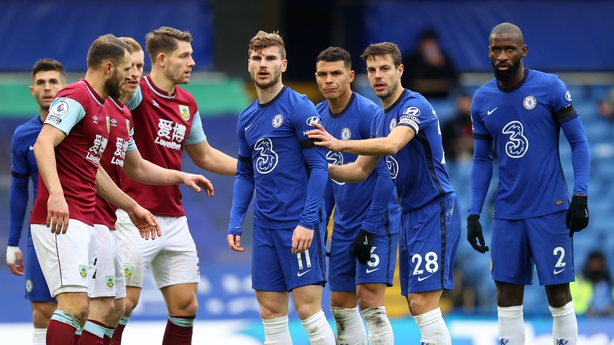 Just when Chelsea feared another shut-out of a half, up popped captain Azpilicueta to break the deadlock.

Mount fed Hudson-Odoi cutting off the right flank and the young England star's cute reverse pass begged for someone to stride on to and lash a shot on goal.

So Azpilicueta did exactly that, leaving Nick Pope no chance and sparking relief and celebration in equal measure for Chelsea and new boss Tuchel.

Having detailed at length in previewing this match the plan to deploy Werner as a hybrid second striker-number 10 on the inside left, that was seemingly abandoned at half-time as Christian Pulisic was brought on.

Abraham was hooked in a harsh move clearly designed to try to force Werner out of his funk, moving the €55 million man into the central striking role.

Hudson-Odoi clipped in a fine first-time cross, only for Werner to head tamely at Pope when he should have scored.

The again-excellent Hudson-Odoi was unlucky to see his deflected effort rebound off the post in a rapid Chelsea break.

But surprise selection Alonso sealed the win in the closing stages, chesting down and blasting home a volley as pleasing on the eye as it would have been nerve-steadying for new head coach Tuchel.