Peter Lawwell signalled the end of an era at Celtic with the announcement that he will retire as chief executive in the summer after 17 years in the role.

The 61-year-old will step down at the end of June after overseeing a period of success that has seen the club win 29 trophies, including 13 league titles and an unprecedented four successive domestic trebles.

Lawwell, who was a divisive figure among the Hoops support, will be replaced by Scottish Rugby's chief operating officer Dominic McKay.

"It has been an enormous privilege to have served the club and our supporters for more than 17 years – a wonderful honour to have been part of an institution I have loved and supported all my life, " Lawwell told the club’s official website.

"I will always be very proud of what we have achieved together and it has been a particular privilege to be involved throughout a period in the club’s history which has brought immense domestic success – as well as so many great European nights at Celtic Park.

"Everything we have aimed for and achieved has been for everyone associated with the club. I have greatly valued my involvement with Celtic supporters in Scotland and around the world.

"I would like to thank them all for the passion, support and commitment they continue to bring to Celtic."

McKay leaves Scottish Rugby after 13 years having been appointed as director of communications and public affairs in January 2008 and becoming chief operating officer in 2015.

He said: "Joining Celtic FC as chief executive is a once in a lifetime opportunity and a new challenge I am very excited about taking on later this year.

"I have been incredibly impressed with the vision and people within the club and I look forward to working with them." 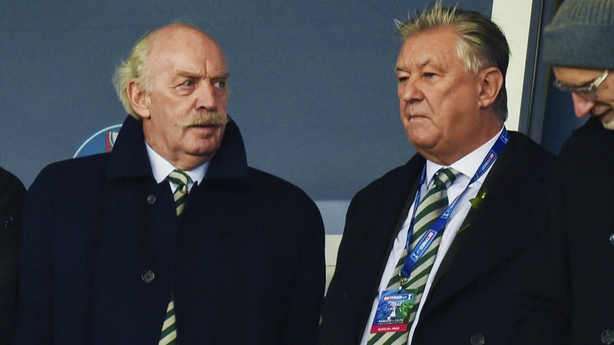 Celtic's principal shareholder, Dermot Desmond, a powerful figure at the club, said: "When Peter told me he was considering retirement, I did my utmost, unsuccessfully, to dissuade him.

"Celtic Football Club owes a major debt of gratitude to Peter Lawwell, who has made a unique and transformative contribution to our club.

"I have been privileged to work with many CEOs and Peter ranks up there with the best of them."

Lawwell has come under increasing criticism this season from fans as the nine-in-a-row champions were knocked out of Europe and the Betfred Cup and have fallen 23 points behind Old Firm rivals Rangers at the top of the table with three games in hand.

There was also a huge furore over the club's decision to take the squad to Dubai for a mid-season training camp with Lawwell admitting it had been "a mistake".

He said: "Now that the process to select Dominic McKay as my successor is complete, I feel the time is now right to announce my retirement at the end of this season.

"I believe the club have identified an excellent successor with the highest integrity who will bring substantial experience and enthusiasm to the role. I wish him every success in the future.

"Dominic will inherit a first-class executive team and a superb group of colleagues. I am grateful to them all for the backing I have received during the past 17 years.

"I have also owed a great deal to the unstinting guidance and support from Dermot Desmond, someone who has been so fundamental to our success on and off the field.

"In addition, I thank our present chairman Ian Bankier, previous chairmen and board members I have worked with, as well as Neil Lennon and the other five football managers and their backroom teams and, of course, so many great players at Celtic Park across the years who have given me and our supporters so much pleasure through a sustained period of success.

"I know that they will provide the same unwavering support and help to Dominic as they help to build on our past success."