Republic of Ireland under-21 boss Jim Crawford has backed "exceptional pros" Troy Parrott and Michael Obafemi to come through frustrating periods at their clubs.

The two attackers have failed to build up a head of steam this season despite their undoubted ability.

Parrott, on loan at Millwall from Tottenham, had to wait until September to make his Lions debut after sustaining an injury in pre-season. On his debut against Burnley in the Carabao Cup he picked up an ankle knock that sidelined him until late November.

Although manager Gary Rowett has talked up the Dubliner's attitude and performances, there was speculation Spurs might recall Parrott this month and loan him out to another club.

That looks unlikely now, but Crawford is confident it's only a matter of time before the 18-year-old clicks.

"You look at Troy Parrott at the minute, I think he needs a goal at Millwall," Crawford said after Ireland learned their group opponents in the qualifiers for the UEFA Under-21 European Championship.

"He's still playing well in his general game. There's been massive hype surrounding both players but they're still young. I just think Troy needs a goal to kick on.

"He is a fantastic talent, an unbelievable finisher, but he's still a young boy. We've got to give him time. Troy has to work hard at his game, listen to the coaches he's working with to develop and reach his full potential."

Southampton man Obafemi looked set to make a loan move to Swansea before sustaining a muscle injury in training. The 20-year-old has made just two appearances for the Saints this term, and was overlooked by Ireland senior manager Stephen Kenny for the autumn's Euros play-off and the Nations League clashes.

"Michael unfortunately suffered a bad injury where he had to have an operation," Crawford added.

"That happens. I think he was due to start against Liverpool with Southampton's first team so it just shows how close and unfortunate he was not to clock up another appearance for the firsts.

"He could have scored. Who knows what could have happened? But again, Michael is a big enough character to get over this injury and get on with his football." 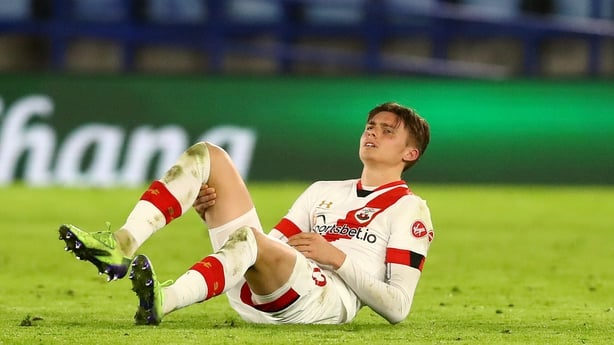 Another Saints player rocked by an injury setback is Will Smallbone, who is - like Obafemi and Parrott - still eligible for the under 21s.

He'd been having a fine game against Leicester City in the Premier League when he went off with what transpired to be an ACL injury that ended his season.

"He was down about it," Crawford said. "He'd had two injuries. He hurt his quad and had just made a recovery.

"Then he hurt his other quad, he pulled a muscle. He was out again for an extensive period of time. He recovered from that, got back into Southampton's first team and I just said to him, 'look all it is is a setback, it will make you stronger'. He's getting his surgery today."

Ireland were drawn against familiar opponents for the Euro qualifiers.

The finals will be held in Georgia and Romania in 2023, and to get there the Boys in Green must again overcome Italy, Sweden and Luxembourg.

The fixture details have yet to be finalised as the associations hammer out the logistics of playing these games in the middle of a pandemic, but they will be run off between this March and June 2022.

"There's a bit of deja vu with Italy, Sweden and Luxembourg," said Crawford.

"We knew whatever group we got, it was going to be a stern test from stat to finish.

"When the three teams came out that we faced in the last campaign you're sort of saying, 'well we understand the way they play' - certainly Italy because the last time we played them in October we are into the situation where Italy had quite a few players that had the coronavirus and they brought in a lot of under 20 players.

"It gives us something to work on that's for sure."