Chris Wood capped a sensational comeback from Burnley as they twice came from behind to claim a 3-2 victory over Aston Villa in an entertaining encounter at Turf Moor.

The Clarets ended Liverpool's long unbeaten run at home in the Premier League but were outplayed in the first half by Villa, who only had Ollie Watkins' 10th goal of the season to show for their dominance.

McNeil was attempting to cross but his ball into the area trickled into the net inside the final quarter of an hour before he provided the assist for Wood moments later, as Burnley scored three for the second game in a row.

However, their 3-0 win at Fulham came in the FA Cup and they had only scored five times at home in the league this season before Wednesday night, while the last time they bagged three in a top-flight game was last February. 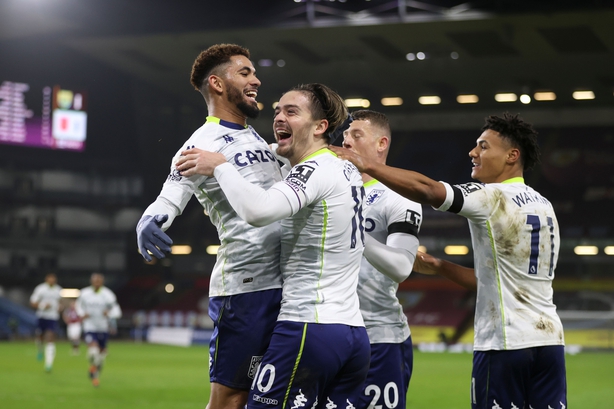 They were slow out  of the traps here after Sean Dyche brought back most of his first-choice stars, having rested them for the fourth-round win at Craven Cottage, but they rallied superbly after the interval.

Ezri Konsa seemed surprised to be unchallenged as he wastefully put a free header over and when Josh Brownhill failed to get the ball under control, Villa's swift counter-attack ended with Watkins shooting at Nick Pope.

Watkins did better moments later, though, getting across Mee and inventively flicking Matt Targett's low cross to the near post beyond a helpless Pope as Villa's free-flowing move was rewarded with a 14th-minute opener.

Grealish fired at Pope before the influential Villa captain teed up Bertrand Traore, who curled wide, as the visitors remained in the ascendancy although they were unable to capitalise on a number of opportunities.

Watkins burst clean through on goal but took one touch too many, allowing Pope to smother the shot and while the loose ball ballooned to Ross Barkley, the on-loan Chelsea midfielder's volley clattered the crossbar.

Burnley were scrambling at the back shortly afterwards as Traore found plenty of the space in the area only for his effort to be blocked by Mee, allowing the under-pressure hosts to reach half-time trailing by just one goal.

Sean Dyche reacted by introducing Jack Cork for the first time in the league this season, withdrawing Brownhill, but the one-way traffic continued as John McGinn forced Pope into action again with a strike from distance.

Villa's profligacy came back to haunt them as Burnley equalised in the 52nd minute in a rare foray forward. Nobody tracked Mee's run to the back post and he rose highest at the back post to score from Burnley's first corner.

The leveller brought greater urgency and intent from Burnley. They were almost exposed by Grealish, who breezed past four defenders before shooting at Pope, but there was no denying the England midfielder in the 68th minute. 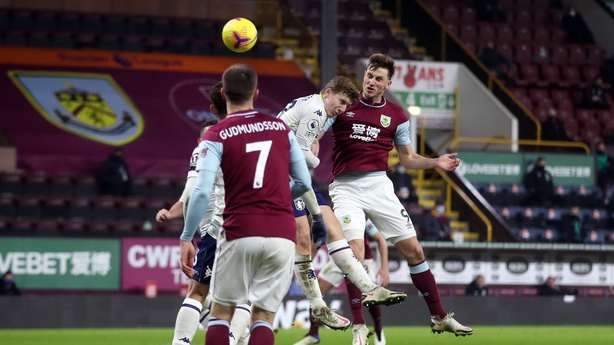 After Wood forced Emi Martinez into an acrobatic save at the other end, Grealish stretched to toe poke into the net following a successful give and go with Douglas Luiz, who picked out his captain with a low cross.

Burnley once again pegged Villa back eight minutes later although it was a fortuitous goal as McNeil's low cross from the left evaded everyone in the area before trickling beyond Martinez and in at the far post.

The topsy-turvy nature of the game continued as Burnley took the lead for the first time in the 79th minute, with McNeil turning provider as his left-wing cross led to Wood heading home after rising above Targett.