David Moyes believes there is much more to come from West Ham despite their latest victory at Crystal Palace moving them into the Premier League top four.

A double from Tomas Soucek was the catalyst for the Hammers to come from behind to beat their London rivals 3-2, with Craig Dawson also on target in the second half.

It helped secure a sixth straight victory in all competitions, with four of them in the league, to put West Ham above Liverpool and into fourth.

"We are getting better and we are an improved team, but I think we are not scratching the surface yet. I think we have so much more we can give," Moyes said.

"Part of a manager's job is to raise expectations at your football club but I will not try and be stupid because West Ham have done it too often and maybe got it wrong.

"I am going to be a bit more steady and sensible if I can. But I am ambitious, I want to manage teams at the top of the league and be competing in the competitions if I can.

"And the players are giving me every hope, they’re doing a great job and they have been exceptional in the way they have played and they want more – I can sense it in the dressing room."

While the Hammers could be back down to seventh by Thursday night, their 10th triumph in the top flight this season was another reminder of their new resolve.

Palace went ahead inside three minutes through Wilfried Zaha, but it failed to deter Moyes’ men, who dominated the majority of the contest. 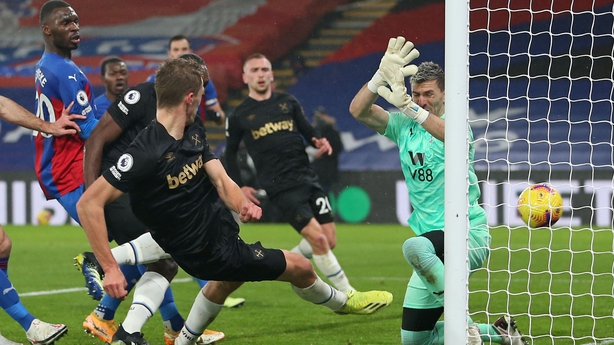 On another night Michail Antonio could have scored a hat-trick after he hit posts twice and saw a close-range effort saved by Vicente Guaita.

As it was, 'Mr Reliable’ Soucek popped up with a crucial brace to take his tally for the season to seven, which makes the £18m signing the club’s top goalscorer in the Premier League this term.

Moyes added: "When you think this time last year we signed him and to come in and hit the ground running in the Premier League is really difficult at any time, but he has not only done that – he has made a big difference.

"He has made a difference with his performances, with the type of lad he is and his honesty, so he has been great and he can score and he showed that tonight."

Despite a dream start it proved to be a night to forget for Palace, who suffered a third loss from their last four matches.

Substitute Michy Batshauyi pulled one back late on to get off the mark in his second stint at the club following a summer loan move from Chelsea, but the Eagles were without assistant boss Ray Lewington after he tested positive for coronavirus.

"It is always important to have your assistant manager with you in games so of course when he is not there we miss him," Roy Hodgson said.

"He caught the virus we think from a household member and has tested positive, but is not feeling that bad luckily.

"It will be a question of retesting towards the end of his isolation period and hopefully he will be given the green light to join us."