Manchester City beat Brighton and Hove Albion 7-1 away to move up to third in the FA Women's Super League on Sunday as Chloe Kelly pulled the strings with two assists and a goal.

Steph Houghton and Caroline Weir scored two apiece for City with Ellen White and Janine Beckie also getting on the scoresheet.

Republic of Ireland forward Rianna Jarrett scored the only goal for Brighton who looked no match for Gareth Taylor's side.

The result moved City up to third, a point above Arsenal with both teams having played 11 games. 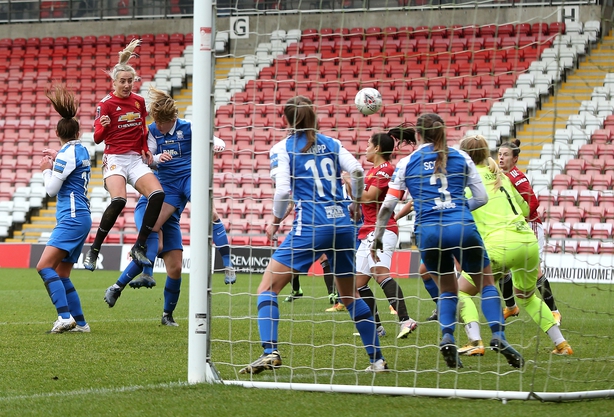 Manchester United moved to the top of the standings with second-half goals from Leah Galton and Ella Toone giving them a 2-0 win over Birmingham City.

United are top with 29 points from 12 games, three points more than Chelsea who have two games in hand.

Earlier, Chelsea and Arsenal's matches that were scheduled to take place on Sunday were postponed after heavy snowfall left the pitches unplayable.

Chelsea were due to play at bottom side Bristol City while Arsenal were set to host West Ham United.

"Our away match versus Bristol City, which was set to kick off at 2pm today, has been postponed due to a heavy downpour of snow overnight resulting in an unplayable pitch," Chelsea said in a statement.