Mohamed Salah’s fine opener was cancelled out by Mason Greenwood in an entertaining first half which was followed by a similar pulsating second period.

Marcus Rashford coolly put United ahead only for Salah to level with his second of the match, setting up a grandstand finish in which star man Fernandes came off the bench to score a super free-kick winner.

A home clash against West Ham is the reward for the Red Devils, who Solskjaer led to victory against Liverpool at the fifth time of asking – 22 years to the day after scoring the winner against them at the same stage of the competition.

Defeat made this the fifth time in six seasons that the Reds had failed to progress beyond the fourth round of the FA Cup under Klopp, whose poor start to 2021 continued as they lost on enemy territory.

The managers made five changes apiece from their midweek fixtures and traded attacks in the early stages.

Greenwood saw a shot saved by the feet of Alisson after a scampering run down the right in the 10th minute, with Liverpool soon threatening at the other end as Dean Henderson stopped a Trent Alexander-Arnold cross.

Greenwood thumped wide of the near post as the lively start to this cup tie continued, with the visitors opening the scoring after a period of promising United play.

With 18 minutes on the clock, Roberto Firmino threaded a lovely pass between Luke Shaw and Victor Lindelof to Salah. The Egypt forward was played onside and lifted the ball over onrushing Henderson with skill and precision.

Curtis Jones took aim from distance and Alexander-Arnold lifted a free-kick over from a great position, but Liverpool's hopes of pulling away were halted in the 26th minute. 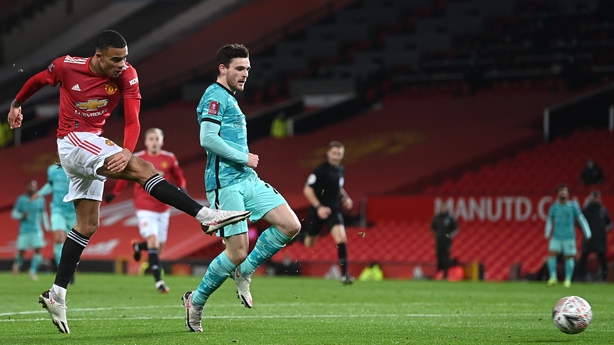 Paul Pogba broke up a Liverpool attack and Donny van de Beek sent a quick pass on to Rashford, who darted down the left before cutting back and sending a fine a diagonal ball over to Greenwood. The teenager matched that play with his finish, firing a low right-footed strike past Alisson.

The equaliser swung the momentum United’s way for the remainder of the first half.

Pogba tried his luck after Rashford showed quick feet in stoppage time, with United continuing in the ascendancy after the break and taking a 48th minute lead.

Liverpool reacted well to falling behind and James Milner was left holding his head in his hands after scooping over from close range.

But the veteran midfielder soon helped the Reds level as they capitalised on uncharacteristically sloppy play by Edinson Cavani, with Milner collecting the ball and then leaving Firmino's cross for Salah to sweep home.

Alexander-Arnold forced Henderson into action and Klopp brought on Sadio Mane, who was booked for a foul on Fred shortly after Henderson stopped Salah.

Henderson again denied the Egyptian as the visitors enjoyed a spell in control, but Fabinho gave United a chance after fouling Cavani on the edge of the box.

The Brazil international avoided a second yellow card but his foul would not go without punishment.

Fernandes stood over the tantalisingly-positioned 78th-minute free-kick and buried it out of Alisson's reach, having come on 12 minutes earlier.

Cavani met a clipped Fernandes cross with a powerful header off the post 10 minutes later, with Salah firing wide as Liverpool failed in their bid to level again.