Chelsea striker Tammy Abraham grabbed a hat-trick in a 3-1 win over second-tier Luton Town on Sunday to book the Premier League side's place in the FA Cup fifth round away to Barnsley.

Chelsea took the lead in the 11th minute when a quick throw-in caught Luton's defence napping, allowing Timo Werner to make a run down the right channel and cut the ball back for Abraham who fired a low shot past goalkeeper Simon Sluga.

Abraham doubled the lead six minutes later when he flicked a header from Reece James' cross past Sluga whose indecisiveness after coming off the line saw him stranded in no-man's land as the ball sailed over him into the net. 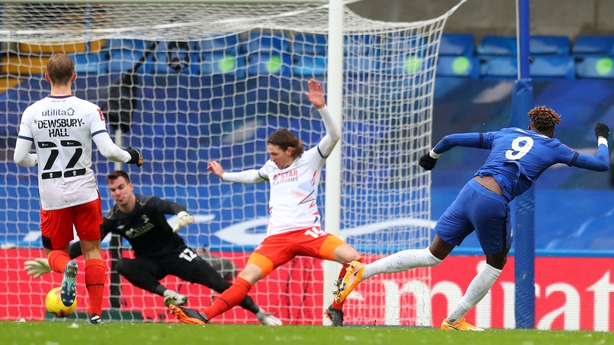 Luton pulled one back on the half-hour mark when Chelsea keeper Kepa Arrizabalaga failed to keep out Jordan Clark's low effort which squeezed between his hand and leg into the net.

But Chelsea began to dominate in the second half and the introduction of Callum Hudson-Odoi had an instant impact as his one-two with Billy Gilmour allowed him to fire the ball into the six-yard box for Abraham to get his third with a simple tap-in.

Werner had the chance to make it 4-1 with a penalty after he was fouled by Clark but the German, who has scored one goal in his last 15 appearances, saw his shot well saved by Sluga.