Steve Cooper hailed the influence of new signing Conor Hourihane after Swansea thrashed Nottingham Forest 5-1 to reach the fifth round of the FA Cup.

Hourihane joined Swansea on Wednesday, with the Republic of Ireland midfielder moving from Aston Villa on loan until the end of the season.

The 29-year-old only had a couple of training session with his new team-mates before starting for the Sky Bet Championship high-fliers.

But Hourihane made an instant impact as Swansea scored more than two in a game for the first time this season.

"I thought he was excellent, he's been so impressive since he walked through the door," Swansea boss Cooper said.

"You can see he's a real focused, professional individual who is not only going to bring what he possesses, but he also wants to buy into what we're trying to do. That's always the best way to be.

"His composure and quality on the ball was how we wanted it and why we wanted to bring him here.

"If that's the start of things to come then happy days."

Forest were outfought and outthought in a one-sided first half which saw Cullen and Grimes score to put Swansea in control.

Manager Chris Hughton's half-time words provoked a strong response from the visitors and Anthony Knockaert halved the deficit after 56 minutes. 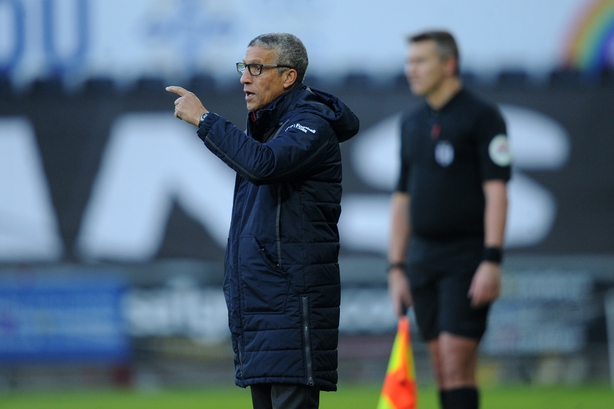 But the Forest revival ended quickly after referee Kevin Friend awarded Swansea a penalty five minutes later, much to the fury of Hughton.

Another Irishman, Ryan Manning, fell just inside the area under a challenge from Joe Worrall, but Hughton felt the Galway defender had initiated the contact.

He said: "We were having our best period of the game and had got back to 2-1, but then the ref makes a dreadful decision.

"I was quite confident from where I was that it wasn't a penalty. I've seen it again, and it isn't, and of course it changes the game.

"I don't like to use the word diving, but from the angles I've seen there's no contact.

"The lad drags his leg a little bit and it's certainly simulation.

"If the referee has to make a decision there he has to give the lad who's gone down a booking. That is quite obvious."