Rangers turned on the style as they celebrated Steven Gerrard's 150th game in charge with a 5-0 romp over Ross County.

The runaway league leaders could afford to see skipper James Tavernier miss his second penalty in succession and still grab a three-goal half-time lead thanks to strikes from Ryan Kent, Filip Helander and Joe Aribo.

County's defending had been abysmal during the opening 45 minutes yet they saw two golden chances to spark a fightback spurned at the start of the second period after twice hitting the frame of Allan McGregor's goal.

But Rangers continued their relentless march towards the title as goals from Ryan Jack - on his return from injury - and Connor Goldson completed the unbeaten Gers' 12th straight home league win of the season.

Gerrard now has 98 victories under his belt as boss and with a 23-point lead over Celtic, only nine more are required to crown his side champions.

John Hughes' Highlanders, meanwhile, remain in trouble with a one-point lead over Motherwell and Hamilton having played two games move than the bottom pair.

It took Gers just six minutes to get the party started. Alfredo Morelos was shadowed by both Callum Morris and Ross Draper but climbed above both to nod Tavernier's deep cross back to Kent, who steered his own header into the top corner. 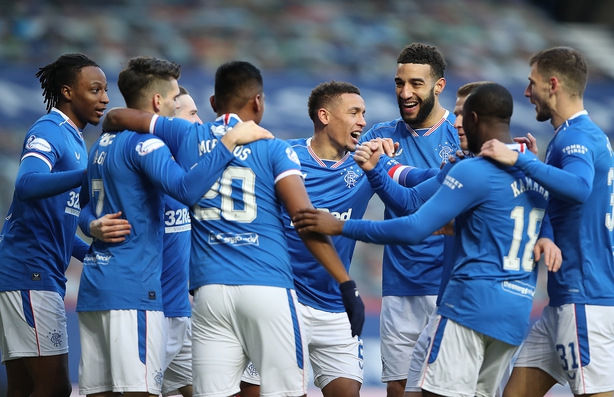 Tavernier had slotted away his first nine penalties of the season successfully before skewing wide at Pittodrie a fortnight ago.

But he was foiled again on 13 minutes by County keeper Ross Laidlaw.

Both Morris and Alex Iacovitti were robbed of possession in quick succession as Morelos hared off towards goal. In his desperation to retrieve the situation, Iacovitti bundled down the Colombian as he crossed into the box.

Referee Euan Anderson decided the County man had man a genuine attempt at a tackle so could only produce a yellow card.

And there was another let off for the Staggies as Laidlaw correctly dived right to hand Tavernier another blot on his spot-kick record.

But Rangers refused to let that miss knock them off their stride.

Laidlaw was relieved to see the ball dribble out for a corner after Kent's bullet strike cannoned off the post before hitting the keeper on the back of the head.

But the second did arrive on 28 minutes as Iacovitti stumbled at the worst possible moment, allowing Helander a free run to bullet home from Borna Barisic's corner.

County's frustrations were made apparent when Iain Vigurs tried in desperation to catch McGregor off his line from 70 yards out. Needless to say the Ibrox keeper was untroubled. 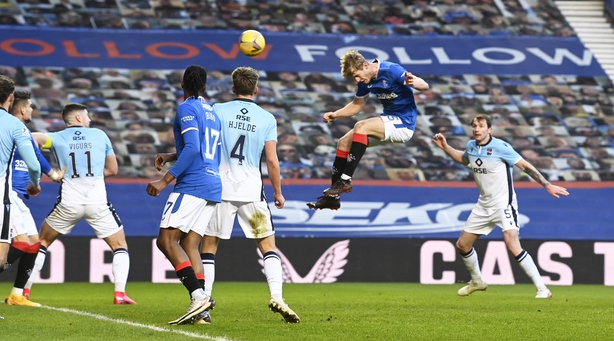 And Aribo put the league leaders out of sight eight minutes before the break with a brilliantly executed goal. Collecting the ball in the far corner, he skipped past Charlie Lakin then Connor Randall before driving back into the box and whipping home with a sublime finish.

Yet Hughes' team could well have grabbed a lifeline 25 seconds into the second period as Harry Paton's low strike clipped the inside of McGregor's left-hand post before bouncing out to safety.

They shook the woodwork again on 53 minutes as the unmarked Iacovitti got onto Vigurs' deep free-kick to head against the face of the bar.

Gerrard was worried about slackness creeping back into his team so made a rare quadruple change on 61 minutes, with Jack among those introduced on his return from a two-month lay-off.

And it took the Scotland midfielder just five minutes to make a contribution as he started and finished the move which brought the fourth.

Feeding the ball to Cedric Itten on the edge of the box, Jack carried on his run as the Swiss hitman flicked the ball wide to Hagi and arrived just in time to slot pass Laidlaw as the Romanian fired his cross into the area.

There was a hunger to Rangers in the closing stages and they gobbled up another with eight minutes left as Goldson stooped to direct Barisic's out-swinging corner past Laidlaw.