Paris St Germain scored three goals in a four-minute blitz in the second half as they demolished 10-man Montpellier 4-0 to go three points clear at the top of Ligue 1.

Kylian Mbappe bagged a double for his first goals of the year with Neymar and Mauro Icardi also finding the back of the net after Montpellier keeper Jonas Omlin was sent off early in the opening half.

The win put PSG, who welcomed coach Mauricio Pochettino back on the bench after he was forced to spend a week in isolation following a positive Covid-19 test, on 45 points from 21 games.

Montpellier are 11th on 28 points.

"I feel better. I can be there tonight while keeping my distances," Pochettino told Telefoot.

"It's always difficult to be away from the team. I'm happy to be here again. The most important thing is to spend this moment in the best possible way and to recover. Now it's done."

Second-placed Lille will move level on points with PSG if they beat Stade Rennais away on Sunday. 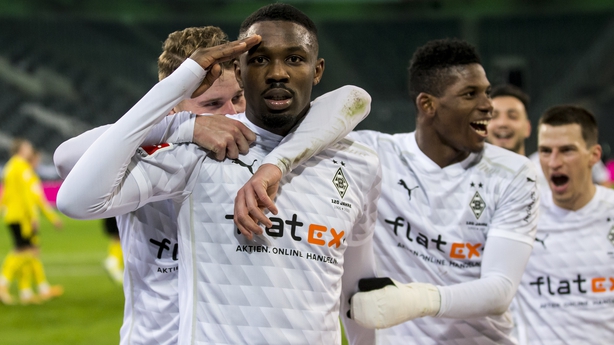 Elsewhere, Borussia Moenchengladbach broke their jinx against neighbours Borussia Dortmund with a 4-2 home win that sent them up to fourth place in the Bundesliga.

Moenchengladbach, who prevailed through a Nico Elvedi double and goals by Ramy Bensebaini and Marcus Thuram, had lost their 11 previous games against Dortmund.

They now have 31 points from 18 games, two ahead of Borussia Dortmund who had taken a 2-1 lead thanks to Erlind Haaland's first-half double.

Bayern Munich, who travel to Schalke 04 on Sunday, lead the table on 39 points from 17 matches.

Meanwhile, Levante and Real Valladolid drew 2-2 in La Liga, while in Serie A Benevento and Torino also shared the points in a 2-2 draw.