Manchester City moved top of the Premier League, temporarily at least, after a brilliant win over Aston Villa in a pulsating game at the Etihad Stadium.

City moved to 38 points, above Leicester City on goal difference, before Manchester United reclaimed top spot with a 2-1 victory over Fulham.

After both sides had created plenty of openings, Bernardo Silva put City ahead in the 79th minute with a brilliant left-footed finish after Rodri had robbed Villa defender Tyrone Mings.

Rodri had come back into play from an offside position and Villa manager Dean Smith was given a red card for his protests at the referee.

Ilkay Gundogan made sure of the three points with a 90th-minute penalty after the ball struck Matty Cash's arm in the box.

"It was a farcical decision. I've not seen a goal like that given. It needs to be looked at. I don't think anyone in this stadium thought it was a goal," said Smith.

Gundogan made sure of the three points with a 90th-minute penalty after a header from Gabriel Jesus struck Cash's raised arm.

City have now won nine straight games in all competitions as part of an unbeaten run stretching back 16 games.

Villa, who are 11th, had defended well and played enterprising football on the break in what was their first league game since New Years Day after a Covid-19 outbreak at the club. 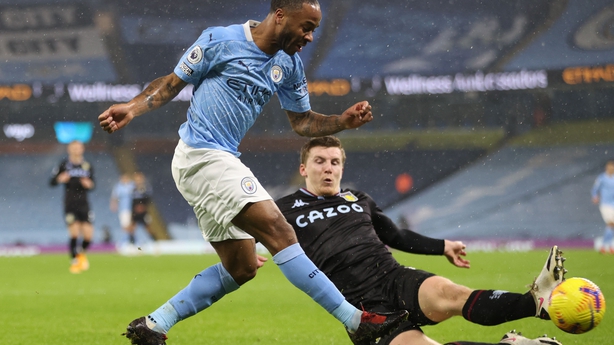 John McGinn could have given Villa the lead just before Silva's strike but mis-kicked inside the box after a clever lay-off from Jack Grealish.

City manager Pep Guardiola was delighted with his side's sixth successive win in the league.

"No-one else has won five, six in a row but it's still the first leg of the season. A lot of games to go but the important thing is that the feeling is good," he said.

"It was a very good performance again, against a top side. They are very dangerous and just look at their results this season. A big victory," added the Spaniard.

Smith, who also disputed the penalty decision, said his team's time in Covid isolation had been difficult but added some perspective.

"It's been tough but much tougher for other people across the country, so it's not too hard for my lads to do 10 days in isolation when some people have done it for nine months."