Antonio, who scored the only goal of the game against Burnley at the weekend, struck again as the Hammers climbed to seventh.

West Ham led through Jarrod Bowen but were pegged back by Matheus Pereira, Albion’s double-penalty hero in the win at Wolves which had reignited Allardyce’s rescue mission.

Robert Snodgrass had impressed in that 3-2 victory but eyebrows were raised before kick-off when it emerged the player, who left West Ham to join the Baggies a fortnight ago, had been left out due to an 'agreement' between the clubs. The Premier League is understood to be looking into the matter.

The Scottish midfielder was instead forced to sit in the stands and watch a distinctly forgettable first half.

As usual Allardyce, back at the club he led to promotion in 2012, set out his side to respect the point and West Ham, again relying solely on Antonio in attack, initially lacked the nous to break them down.

Hammers defender Craig Dawson should have opened the scoring against his former side but planted a free header wide at the far post from a corner.

The first half was meandering towards a goalless conclusion when, in stoppage time, Vladimir Coufal burst into the area from the right. 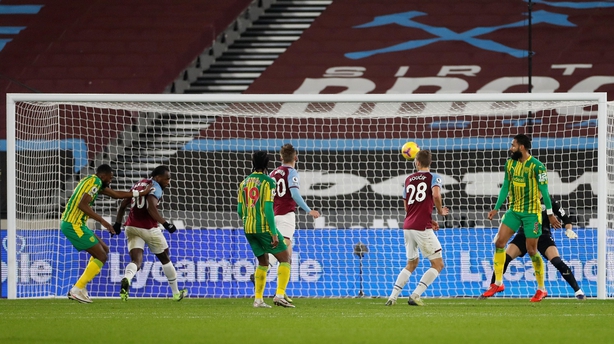 The Czech full-back drilled in a cross which Bowen, with little time to react, managed to divert in with his chest from four yards out.

Early in the second half, Lukasz Fabianski kept out Conor Gallagher’s angled shot, but moments later the Poland keeper was beaten.

West Ham’s defence backed off Pereira as he reached the edge of the box and the Brazilian winger made them pay with a low shot which arrowed into the bottom corner.

Gallagher was in an offside position as the ball whistled past him but VAR deemed the midfielder was not interfering with play.

West Ham went in search of a winner and Manuel Lanzini’s close-range effort was headed off the line by Dara O’Shea before Declan Rice’s cross trickled along an empty goalmouth with no one able to get a touch.

The goal arrived in the 65th minute when Aaron Cresswell crossed, substitute Andriy Yarmolenko headed back across goal and Antonio hooked the ball over the line.

The Baggies had chances to equalise again but Gallagher’s shot was too close to Fabianski and Darnell Furlong volleyed wide.