Pep Guardiola says John Stones deserves all the praise he gets after scoring twice in his latest outstanding display for Manchester City.

The 26-year-old defender grabbed City's first and third goals - his first strikes for the club in the Premier League - as they thrashed Crystal Palace 4-0 at the Etihad Stadium on Sunday.

Stones appeared to be facing an uncertain future last summer after falling out of favour under manager Guardiola.

It seemed he might have to settle for being fourth-choice centre-back - at best - behind Ruben Dias, Aymeric Laporte and Nathan Ake.

Yet given an opportunity to play alongside new signing Dias early in the campaign, he grasped it and his position now looks rock-solid. In the 10 games he and Dias have started this season, City have won nine and conceded just one goal.

"If there is one guy who deserves the best it is John," Guardiola said.

"He's struggled a lot but he's a fantastic human being. His parents must be so proud. 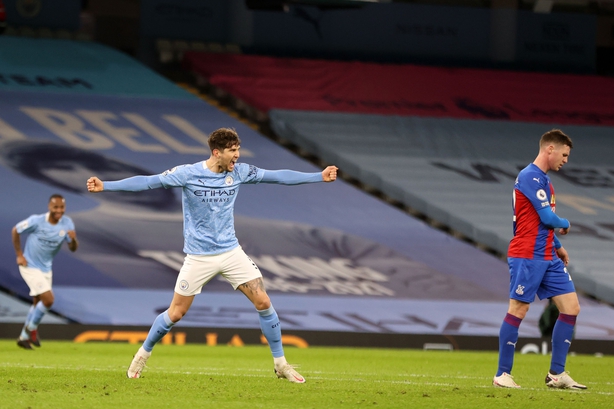 "He's had personal problems in the past, injuries. At the moment he's set up good and he's starting to play.

"Confidence is everything. He won his confidence for himself. As managers, we can't give confidence.

"He started to play alongside Ruben and they've played really well."

City's victory was their fifth in succession in the Premier League and lifted them above champions Liverpool into second in the table. They are two points behind leaders Manchester United with a game in hand and, after a slow start to the season, seem to be making their move.

"Of course we fought a lot to be up there, like many clubs, and we will have to fight a lot to stay there," Guardiola said.

"It is a weird season. Everyone can beat everyone. It is difficult every game but I am happy, especially for the players, for another good performance and for the three points."

Guardiola, who celebrates his 50th birthday on Monday, added the result was a "nice present".
Palace boss Roy Hodgson was frustrated how his side fell away after showing resilience in the first half.

City were made to wait 26 minutes for their opener from Stones and the other three goals - Ilkay Gundogan and Raheem Sterling scored either side of Stones' second - all came in the second half.

Hodgson said: "At half-time I didn't see us losing by that heavy margin. We were on the end of some spectacular goals but I was disappointed we had a hand in them and presented them with a couple of those goals.

"We were partly the architects of our downfall. We have to give credit to the opposition, who were so good. I don't want to take anything away from City.

"So I can understand we are defeated but the thing that hurts me was that those goals in the second half came, and at the end of the game we are looking at a heavy defeat."