West Ham boss David Moyes has talked up the potential of 18-year-old Dubliner Mipo Odubeko, who made his first-team debut in Monday night's FA Cup defeat of Stockport County.

And that may open the door for Republic of Ireland underage international Odubeko.

The former Crumlin United and St Joseph's Boys striker initially moved across the water to Manchester City before switching to the red half of the city, where he really impressed.

In October 2019, he completed a move to West Ham after rejecting the chance to make the breakthrough at Manchester United.

Feyenoord, Bayern Munich, Genoa, Newcastle and Burnley - who West Ham play on Saturday - had all been interested in snapping him up.

Odubeko has continued to improve in London, and that has not gone unnoticed by his manager.

"I think he's somebody we're looking forward to working with, but he pulled his hamstring four months ago and has been out for three months," said Moyes.

"He's a young player we have big hopes for. With Mipo, he's just back from a long-term hamstring injury, but we like him a lot and will try and bring him along at the right time and when we need him." 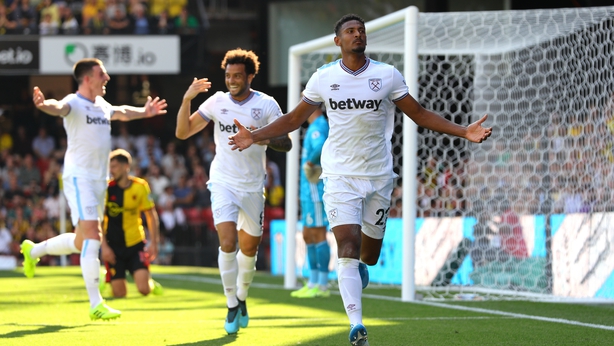 The Haller cash should be burning a hole in Moyes' pocket while the transfer window remains open, but he insisted: "I'm only looking at four wins from the next four games.

"If I can do that, and make sure I do as well as I can, then nothing else is that important. If something else comes along that can help us win games then we'll look at it, but the people who are important are the players who are in this building at the moment.

"We want the players improving and doing better than they have done at the moment, that's the message. If something else comes along we'll soon let you know."

The Hammers may have enjoyed an encouraging start to the season but Moyes wants more.

Having narrowly avoided relegation last season they are currently safely in the top 10 and have half an eye on the European places.

Moyes must be hugely satisfied with the way he has turned the troubled club around and got the players performing in his second stint as manager.

But the Scot said: "Yeah, but I'm not telling them that! They are only getting told they have got to do better. I am one of these hard ones, like the headmaster who doesn't smile. Must do better."

The Hammers are looking to extend their unbeaten run to five matches in all competitions when they host the Clarets.

Lukasz Fabianski is likely to return in goal in place of Ireland stopper Darren Randolph after overcoming a slight thigh problem. Wing-back Arthur Masuaku is still out as he recovers from knee surgery.