Sheffield United boss Chris Wilder felt his side rediscovered their identity as they secured a first Premier League win of the season against Newcastle.

The Blades were a revelation on their return to the top flight during the last campaign, finishing ninth and mounting a serious challenge for European football, but they have struggled this time around.

Rooted to the bottom of the table after 15 defeats from 17 matches prior to Tuesday night, Wilder's side have made the worst ever start to a Premier League season and the ignominy of getting fewer points that the 11 Derby managed in 2007-08 is a real possibility.

However, against a negative, unimaginative and uninspiring Newcastle team on the night, whose task was made even harder by Ryan Fraser's red card on the stroke of half-time, the Blades looked like the team of last season.

Wilder's men dominated throughout, with crisp passing and incisive, free-flowing football and they eventually got their reward when club captain Billy Sharp, on as a second-half substitute, scored the 73rd-minute winner as he made it 1-0 from the penalty spot. 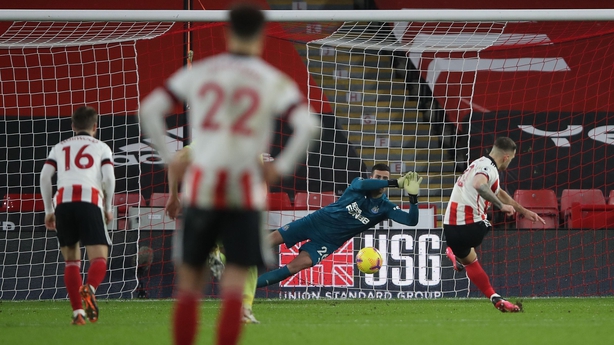 "I thought we were in control and confident on the ball and pushed it and it was a deserved win. It looked like we got our identity back," said Wilder.

"I thought the performance was really good. I know the sending-off will be talked about, making it easier for us, but I thought in the first half it was coming even before that.

"I felt we had an identity and it was us with the handbrake off, going for it and playing well in and out of possession.

"I'm delighted with the performance and it is a big result for the players and supporters obviously, given the length of time we haven't had a win.

"The key now is to take it forward, we can't waste it. We've got an incredible challenge ahead of us but if we can make it competitive..."

Newcastle have gone out of both cup competitions in the last month, during which time they are without a win in six Premier League matches, losing four.

Magpies manager Steve Bruce admitted the performance at Bramall Lane was poor and he faced questions about his future after the game, vowing to fight on.

"The first half was arguably as poor as we've played for a long time, there's no disputing that," said Bruce.

"I'm bitterly disappointed that we haven't played well enough, especially in the first half. I'll never ever walk from a challenge, and I think I've been it long enough to have that respect.

"I understand that, especially watching the first half, we weren't good enough, and at the end of the day, I take responsibility for that, because I pick the team."

Bruce disputed the awarding of the penalty which won the match. A long ball forward was contested between Sharp and Federico Fernandez in the box, with the Blades striker going down under the challenge. There was also a suggestion the ball hit the arm of the Newcastle defender.

Referee Andy Madley awarded the spot-kick after consulting VAR and Sharp made no mistake from 12 yards.

Bruce said: "I think the two yellows for Ryan I agree with but I can't see the penalty at all. I've looked back at it four or five times and the referee made the right decision to start with.

"Arguably it is a foul on Feddy (Federico Fernandez) with his shirt being pulled, but if that's an intentional handball we may a well wrap up the whole VAR thing and go home." 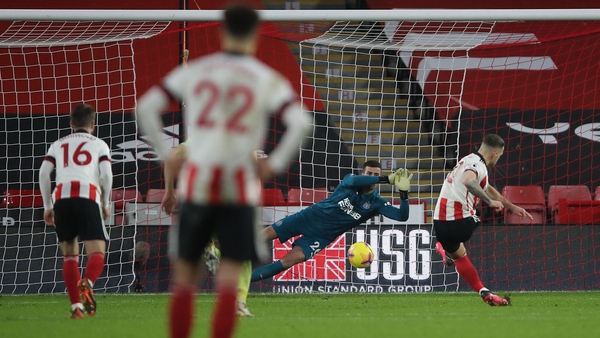