Paul Pogba fired Manchester United to the top of the Premier League as Ole Gunnar Solskjaer's men ground out an important victory at Burnley.

The Red Devils had won their previous four visits to Turf Moor and knew a positive result would move them top at this stage of the season for the first time since Alex Ferguson bowed out as a champion in 2012-13.

Pogba’s second-half strike was the difference as United secured the result their dominance deserved at Burnley, with the win giving them a three-point cushion over Liverpool heading into Sunday’s mouth-watering Anfield encounter.

The video assistant referee provided the main talking point of a tense opening period, with last man Robbie Brady avoiding sanction for bringing down Edinson Cavani due to a Luke Shaw foul in the build-up.

The left-back, who was booked for his hefty challenge on Johann Berg Gudmundsson, soon swung in a cross that Harry Maguire headed home from an acute angle, only to be ruled out for an apparent foul on Erik Pieters.

The United skipper was furious that the decision was not reviewed and his side flew out of the blocks in the second half.

Solskjaer's men completely controlled proceedings and Pogba came up trumps in the 71st minute, firing home at end of a move he started via a slight Matthew Lowton deflection.

Tuesday's match was played out in sub-zero temperatures in Lancashire, where the home side attempted to make things uncomfortable from the outset with balls into the box and dogged defensive play.

Cavani was angry to caught by the arm of Ben Mee as United looked to make early attacking headway, but it took 17 minutes for them to muster a shot and Nick Pope dealt with Bruno Fernandes’ attempt.

Anthony Martial saw an overhead kick blocked as United looked to find a way through, but Burnley were nearly gifted an opener by Fernandes.

Sean Dyche’s men pounced on the Portuguese’s uncharacteristically heavy touch and made a series of quick passes, resulting in a close-range Chris Wood shot that Eric Bailly blocked and sent looping over his own goal. 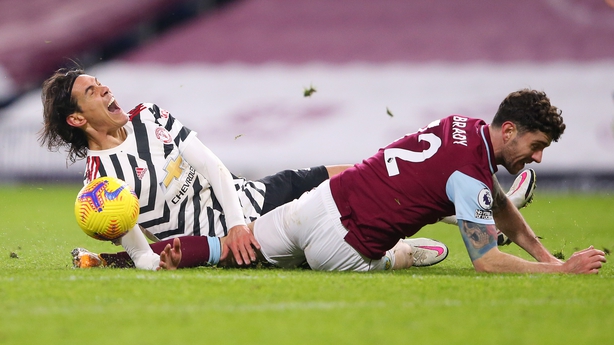 Martial bent over wastefully soon before controversy reigned at Turf Moor, where Shaw smashed into a challenge with Gudmundsson and launched a rapid break that ended with Cavani being brought down by last man Brady.

Referee Kevin Friend only booked the Republic of Ireland international, leading both teams to fume at the official about the other side’s challenge.

There was a lengthy VAR review of the passage of play and a red card against Brady was ruled out after Friend went to the monitor, with that yellow rescinded and Shaw instead booked.

There was more controversy soon after when Maguire saw a headed opener ruled out for an apparent foul on Pieters when rising to meet Shaw’s cross.

Aggrieved United continued to push for an opener as half-time approached, with Martial’s curling effort bound for the top corner until Pope pushed over.

Shaw saw penalty appeals ignored and fuming Fernandes was handed a yellow card, with Maguire having a long chat with referee Friend at half-time.

United returned strongly and Cavani fluffed his lines shortly after the restart, with Marcus Rashford and Fernandes seeing low shots saved as pressure continued to mount on the Clarets.

Pope stopped a hopeful Fernandes strike and Cavani bent wide of the far post after wriggling free at a corner as it began to feel like one that would get away until Pogba’s 71st-minute strike.

The midfielder won the header that started a move he finished with aplomb, volleying home Rashford’s cross from the right as the ball flew home via a deflection off Lowton.

The relief was as palpable and United looked to add another, with James Tarkowksi producing an important last-ditch challenge on Martial.

Josh Brownhill struck wide and substitute Matej Vydra saw an effort deflected into the side netting by Bailly as Burnley launched a late attack, with the VAR checking a handball against Maguire in the box.

Things ended nervily as Tarkowski miscued a shot, with Shaw needing treatment and Martial wasting a later chance to put things to bed.