Brighton survived a penalty shoot-out at Newport to book a place in the fourth round of the FA Cup, winning 4-3 on spot-kicks after the tie had been drawn 1-1 after 120 minutes.

Goalkeeper Jason Steele, who was at fault for Newport's equaliser in the final seconds of normal time, made four penalty saves to send the Seagulls through.

Brighton thought they had won the tie when Solly March struck from the edge of the penalty area with just 10 seconds of the 90 minutes remaining.

But Newport saved themselves with the final act in the sixth minute of stoppage time, Steele letting Liam Shephard's cross slip through his grasp and the unfortunate Adam Webster diverted the ball into his own net to set up extra time.

Webster, though, scored the decisive spot-kick after Pascal Gross, Lewis Dunk and Davy Propper had been on target for Brighton, with Joss Labadie, Ryan Taylor and Jamie Proctor replying for Newport.

Defeat was harsh on Newport's outstanding goalkeeper Tom King, who made two stops in the shoot-out himself after earlier denying Andi Zeqiri and Dunk with breathtaking saves. 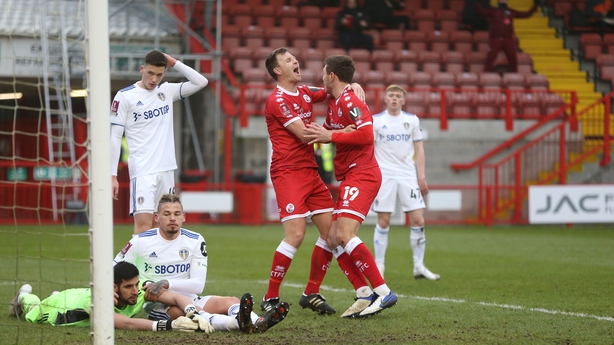 Elsewhere, Leeds found themselves on the end of a major FA Cup third-round giant-killing as they were stunned 3-0 by League Two Crawley (pictured above).

Marcelo Bielsa's side were reeling from two goals inside three second-half minutes from Nick Tsaroulla and Ashley Nadesan.

Leeds attempted to claw their way back into the game only for Jordan Tunnicliffe to finish them off with 20 minutes remaining and secure a memorable scalp for the Sussex club.

To rub salt in the wounds Crawley even handed a debut to former reality star Mark Wright as a late substitute, but the only way was out of the cup for Leeds.

Tottenham ensured they were not the victims of the biggest ever FA Cup shock with a 5-0 win at Marine, who even in defeat proved the magic of the competition is still alive.

Jose Mourinho's side won it through Carlos Vinicius’ first-half hat-trick, a Lucas Moura free-kick and a goal which saw Alfie Devine become the club’s youngest ever player and goalscorer at 16 years and 163 days.

There was no such trouble for Chelsea and Manchester City who were comfortable winners at home.

Frank Lampard named a strong side against League Two Morecambe as he attempted to kick-start their stuttering season.

And he was rewarded with goals from birthday boy Mason Mount, Timo Werner, Callum Hudson-Odoi and Kai Havertz in a 4-0 victory.

City also cruised into the fourth round as two goals from Bernardo Silva and a third from Phil Foden wrapped up a 3-0 win over Birmingham before half-time.

A superb Chris Martin strike gave Bristol City a 2-1 win over Portsmouth and Barnsley beat Tranmere 2-0 thanks to a goal from Michal Helik and a late Cauley Woodrow penalty. Cheltenham also progressed with a 2-1 win over Mansfield Town.

Stockport County host West Ham United on Monday night in what is the final match of the third round.