Tottenham boss Jose Mourinho says taking the League Cup seriously is the key to his success in the competition after booking his fifth final appearance as his side beat Brentford 2-0.

Mourinho was brought to Spurs to end their 13-year trophy drought and now only Manchester City or Manchester United stand in his way after Moussa Sissoko and Son Heung-min goals saw off the Championship side in the Carabao Cup semi-final.

The Portuguese has a love affair with the competition, having won it four times previously with Chelsea and United, and becomes just the third man to reach the final with three different clubs following Ron Saunders and Ron Atkinson.

Mourinho has always paid it full respect and did so again as he named strong teams in each of the last two rounds against Stoke and Brentford.

"I come to England in 2004 and I remember that in that period I had to learn the meaning of the cups here and I always took it seriously," he said.

"If there is any secret, it's to take it seriously. To respect what English football is, what English clubs are, what English lower divisions are, and try to not be surprised in any of the games from smaller quality, and when you have like we had this season a game against Chelsea to go serious and with ambition. Apart from that there is no other secret.

"I just say we are honest people. The guys since the first game against Chelsea, then Stoke, and now the guys took it seriously. 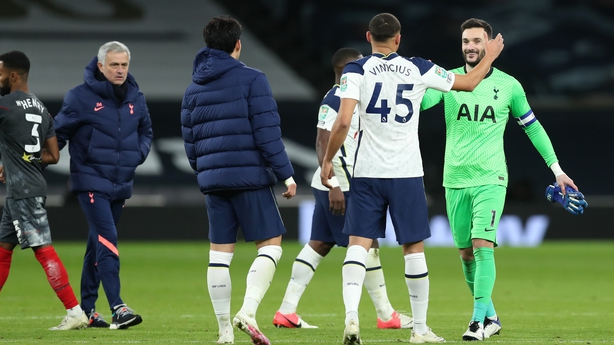 "And that's what I hope to do on Sunday in Crosby against Marine (in the FA Cup). Try to be serious, respect the opponents, and try to progress."

Having enjoyed a third-round bye and then Championship opposition in the quarter-final and semi-final, things will be a lot tougher in the final against one of the Manchester clubs.

Mourinho says the top clubs pay it more respect than people think, with only City, United or Chelsea winning it in the last seven seasons.

"If you see the winners you realise the big clubs want to win it," he said.

Mourinho was not overly enamoured with his side's display against the Bees, but declared it job done after goals in either half from Sissoko and Son.

"Defensively was good. We were always in control," he said. "With the ball we scored two goals, we could have scored a couple more.

"But I'm not happy. I think we have to play better. Sometimes bad decisions, sometimes technical mistakes. Many times recovering the ball and not being vertical in playing backwards.

"I think we have to do better but great respect for the opponent, for the game, for the responsibility, for the ambition. but job done, we are in the final."