AC Milan overcame the first-half dismissal of Sandro Tonali to win 2-0 at Benevento and bounce straight back to the top of Serie A.

Milan had been leapfrogged earlier on Sunday by city rivals Inter, who thrashed Crotone 6-2, but secured a third straight win to return to the summit thanks to Franck Kessie's first-half penalty and Rafael Leao's effort after the interval.

Italy midfielder Tonali had a yellow card upgraded to red by VAR in the 33rd minute following his high tackle on Artur Ionita.

Lautaro Martinez fired a hat-trick for Inter, who notched their eighth successive league victory, while Romelu Lukaku scored his 50th goal for the club.

Niccolo Zanellato had given Crotone the lead and Vladimir Golemic's penalty made it 2-2, but Achraf Hakimi was also on target for Inter, while home midfielder Luca Marrone scored a own goal.

Cristiano Ronaldo scored twice - his 13th and 14th league goals of the season - as Juventus beat Udinese 4-1 to move up to fifth in the table.

Ronaldo opened the scoring in the first half and after Federico Chiesa made it 2-0 early in the second period, he added his second.

Udinese, who saw an early effort from Rodrigo De Paul overturned by VAR, scored a late consolation through Marvin Zeegelaar before Paulo Dybala completed the scoring in added time. 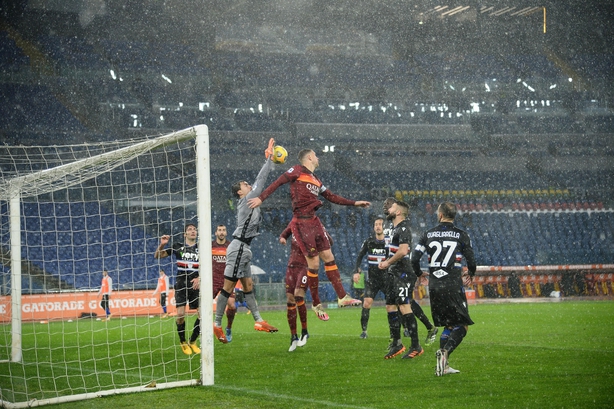 Roma remain third thanks to Edin Dzeko's solitary goal at home against Sampdoria and Napoli climbed one place to fourth after a 4-1 win at Cagliari.

Piotr Zielinski scored in either half for Napoli, his second two minutes after Joao Pedro's equaliser, before Hirving Lozano and Lorenzo Insigne's late penalty sealed all three points.

Sassuolo dropped two places to sixth after they were thrashed 5-1 at Atalanta.

Duvan Zapata and Matteo Pessina gave Atalanta a 2-0 half-time lead and after Zapata had struck his second, further goals from Robin Gosens and Luis Muriel made it 5-0. Vlad Chiriches scored Sassualo's consolation.

Lazio were held 1-1 at second-bottom Genoa, who hit back through Mattia Destro after Ciro Immobile's first-half penalty had given Lazio the lead.

Mattia Zaccagni struck the game's only goal with 15 minutes left as Verona registered their first win in four with a 1-0 victory at Spezia.

Torino climbed out of the bottom three with their first league win since early November as goals from Wilfried Singo, Armando Izzo and Amer Gojak secured them a 3-0 victory at Parma

In Spain, Luis Suarez's last-minute winner clinched Atletico Madrid a 2-1 win at Alaves and lifted them back to the top of La Liga.

Real had leapfrogged their city rivals after Saturday's 2-0 win against Celta Vigo, but after Felipe's late own goal had cancelled out Marcos Llorente's first-half opener for Atletico, Suarez struck from close range in the 90th minute.

Alaves were reduced to 10 men in the 63rd minute following Victor Laguardia's straight red card for his foul on Thomas Lemar. 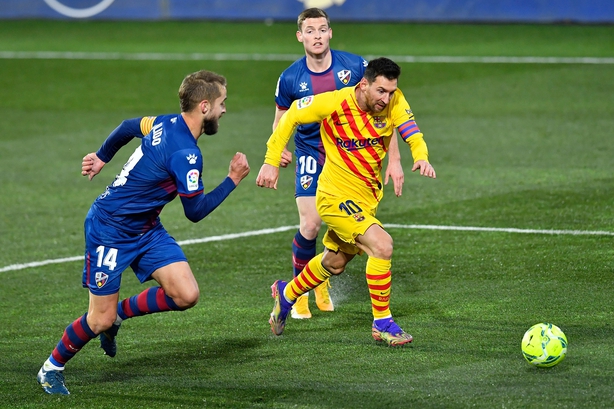 Lionel Messi returned from an ankle injury to set up the winner for Frenkie de Jong as Barcelona won 1-0 at bottom club Huesca.

Messi, who missed Tuesday's home draw against Eibar, made his 750th appearance for Barcelona and his 500th in La Liga.

Real Sociedad remain third despite being held 1-1 at home by Osasuna, who led 1-0 at the break through Jonathan Calleri before teenager Ander Barrenetxea's equaliser.

Another teenager, Bryan Gil, scored both Eibar's goals in a 2-0 home win against Granada, who stay seventh.

Iker Muniain's first-half effort clinched Athletic Bilbao a 1-0 home win against Elche on the day that the club announced they had agreed a deal in principle for former Valencia boss Marcelino Garcia Toral to become head coach.

Bayern Munich leapfrogged RB Leipzig to go top of the Bundesliga after coming from 2-0 down to beat Mainz 5-2 at the Allianz Arena.

Jonathan Burkhardt and Alexander Hack's header put Mainz in control at half-time, but Bayern responded after the break.

Joshua Kimmich, Leroy Sane and Niklas Sule put Hansi Flick's side 3-2 up with 20 minutes left before Robert Lewandowski converted a penalty and added his second in the closing stages.

Jadon Sancho notched his first league goal of the season and provided an assist as Borussia Dortmund beat Wolfsburg 2-0 to go fourth.

Manuel Akanji's header from Sancho's corner broke the deadlock in the second half and the England forward made it 2-0 in time added on.