Frank Lampard has acknowledged Chelsea can expect more "pain" if he is allowed to complete his Stamford Bridge rebuilding work.

Blues boss Lampard admitted to feeling the "heat" in the wake of Sunday's 3-1 Premier League loss to Manchester City in west London.

Ilkay Gundogan, Phil Foden and Kevin De Bruyne fired City into a 3-0 lead in just 35 minutes, with Callum Hudson-Odoi bagging a late consolation for the hosts.

"I was real after we beat Leeds (3-1 on 5 December) saying that we're not title contenders, and I'm real now saying it takes time," Lampard said.

4 - Since the start of December, only West Bromwich Albion (5) and Sheffield United (6) have lost more Premier League games than Chelsea (4). Concerning. pic.twitter.com/APVKTh15Wg

"Any build or rebuild takes pain; pain behind the scenes and pain on the pitch occasionally.

"I'll always feel heat: I felt heat when we were on our good run, because I know that round the corner can be a negative.

"Maybe (N'Golo) Kante you can take out, but when you look around the team, there's a lot of youth, a lot of new players that are trying to come in and settle."

Chelsea have now suffered four defeats in their last six league matches - but Lampard refused to talk for his bosses over his long-term future.

"I'm not going to speak for people above me or the board, it's not for me to do that," he said. "It is what it is on those terms, I can only speak about it as I see it, as a manager and a club.

"When we had 16 games unbeaten I still saw those flaws in our game. When we've lost four games I still see those flaws now.

"And I can't think about what people say beyond, because I can't be distracted.

"I'm relaxed about peaks and troughs of form. I expected periods of difficulties this year, and I've spoken about that a lot already.

"I said it when we beat Leeds and people were championing us as title contenders.

"Whether it puts pressure on me or not, it doesn't matter. A month ago everyone was asking me whether I was going to sign a new contract, and now they will be saying different things.

"But over a busy period we've lost four games of football, so the pressure remains constant and you know it's there."

He continued: "My job is to keep working, my job is to lift the players who felt that in the first half.

"We're fighting to try to match those levels and I know it takes us time."

City stormed to victory despite a clutch of players missing after a coronavirus outbreak at the club.

Boss Pep Guardiola opted to include Benjamin Mendy in the match squad despite the full-back admitting he breached social-distancing rules with New Year's Eve celebrations.

Defending the decision to include Mendy, Guardiola claimed society is too quick to judge footballers. 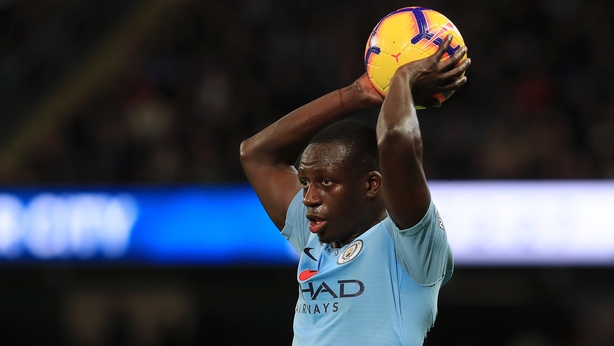 Asked if he had considered leaving out Mendy, Guardiola said: "No, he's part of the group, he's one of the good guys. It must be love in our group. He's a special guy for all of us, he has an incredible heart.

"I would like to see how many people judge him if they have the good intentions he has.

"It would be better if, before we judge others, we judge ourselves.

"I'm not justifying that, he broke the rules. But don't give too many lessons to others.

"Of course it was not correct what he has done, but don't judge him too much. Maybe many people have done the same. It's easy to judge others.

"If everyone put those intentions aside, maybe it would be better."

Asked if footballers must be held to higher standards as role models, Guardiola said: "I would not agree with this. The only exception is we do our job. We appear more in social media and interviews, but that's it.

"I don't think footballers are more important than doctors, architect or teachers for my kids.

"So they only have the same responsibility as everyone else on the world. Mendy knows he made a big mistake, but it finishes here."