Steven Gerrard hailed Allan McGregor after his man-of-the-match performance helped Rangers to a 1-0 win over 10-man Celtic which stretched their title lead to 19 points.

The veteran keeper, 39 at the end of the month, was at his best in the early stages at Ibrox as the Hoops dominated with one save in particular from Leigh Griffiths - when he tipped a shot on to the post and behind - especially impressive.

Celtic's stand-in skipper Callum McGregor put the ball into his own net just seven minutes after Nir Bitton had been sent off after the break for a 'last man' tackle on Alfredo Morelos to leave the Light Blues 19 points clear of the Parkhead men, albeit having played three games more.

Gers boss Gerrard said of McGregor: "I was delighted with him. He got man of the match and it was thoroughly deserved.

"A couple of the saves in the first half were world-class.

"We talk about him a lot after big games, which tells its own story. You are talking about a legend of the club, a phenomenal goalkeeper.

"It's a shame he is nearly as old as me, because I'd love him to be my keeper for many, many more years.

"That's what keepers need to do, they need to help you win big football matches. I'm really proud of his performance today." 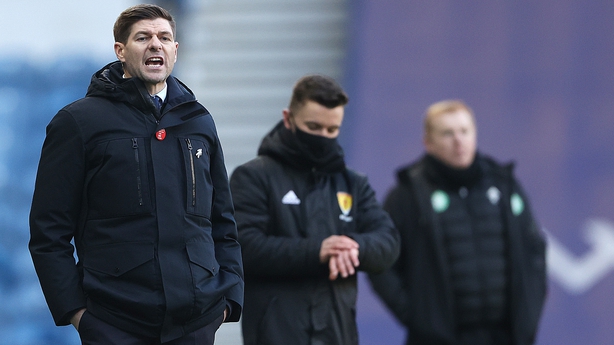 Gerrard credited Celtic with full points from their games in hand as he analysed the afternoon and the title race.

He said: "My reaction to the win is I'm really proud, really happy and satisfied with the three important points. It stretches our lead to 10 points with where it's at.

"We played against a really good team today. Celtic were excellent for the first 45 minutes, we really struggled to get a foothold in the game.

"There was a significant improvement in us from half-time up until the red card.

"These games are all about big moments. Celtic have got one badly wrong and we have capitalised on it and gone on to win the game.

"You don't always get out of this game what your performance deserves. We know that more than most. So to win and not be at our best is a big positive for me.

"People won't remember the performance or what happened in the game in months to come.

"Teams are going to keep trying to beat us. But we need to just keep being ourselves"

"I don't get many people stopping me on the street now and telling me how great we were in the League Cup final last season which we never got anything from. So it's about the result at the end of the day."

Gerrard is aware that many people will believe Rangers will go on to press home their advantage.

He said: "I'd be a liar if I said we are not going to be aware of that. Prior to this game, we were aware of the noise.

"But it's my job to protect my players and we are not going to gain anything or get an advantage by listening to the noise and getting involved in playing to it.

"We need to keep a tight-knit group and keep doing the right things.

"We know it's going to be tough. Teams are going to keep trying to beat us. But we need to just keep being ourselves.

"Everything we have done this season has got us into this position and we need to keep fighting to remain there."