Son Heung-min scored his 100th goal for Tottenham as they returned to winning ways with a 3-0 defeat of Leeds United to climb back into the Premier League's top four.

The South Korean doubled Tottenham's lead just before the interval after strike partner Harry Kane's penalty had given the hosts the lead on a crisp winter day in north London.

Toby Alderweireld's header made it 3-0 in the 50th minute.

Tottenham, who topped the table in December, had gone four league games without a win, but a comfortable victory over Leeds sent them into third spot with 29 points from 16 games.

The only blemish was having Republic of International Matt Doherty dismissed in the 90th minute for a second yellow card.

It was the first time Spurs scored three goals in a league game since they drew 3-3 with West Ham in October as the shackles finally came off after a month of sitting on leads.

Marcelo Bielsa's men had their moments, and peppered the Spurs goal with 16 shots, but they lacked the quality to ever look like scoring and their two-game winning run is over.

The early signs for Leeds were promising as they found space and opportunities at the expense of Tottenham, who earlier on Saturday condemned players Erik Lamela, Sergio Reguilon and Giovani Lo Celso for breaking coronavirus rules.

Ezgjan Alioski drilled into the side-netting while Patrick Bamford put a free header over from 12 yards after he lost his marker in the box.

Spurs, criticised for their lack of adventure in recent weeks, came to life and Kane flashed an effort over before Pierre-Emile Hojbjerg shot straight at Illan Meslier.

It was the hosts who broke the deadlock in the 29th minute, but Leeds more than played their part in their own downfall.

Playing out from the back, goalkeeper Meslier misplaced a pass to Harry Winks, who found Steven Bergwijn and the Dutchman drew a foul out of Alioski.

Kane made no mistake from the spot as he fired home his 17th goal of the season in all competitions.

Spurs should have doubled their lead five minutes later as Bergwijn did brilliantly to turn in the box but he blazed over from close range.

Leeds threatened a response as Jack Harrison curled just over and Bamford shot straight at Hugo Lloris, but the half ended badly for them as the hosts doubled their lead.

It was the trusted duo that came up trumps again for Spurs, as Kane whipped in a cross for Son at the near post and the South Korean brought up his ton with a neat finish.

Spurs killed the game five minutes after the restart with a third but Meslier will not want to watch it back as his difficult afternoon continued. 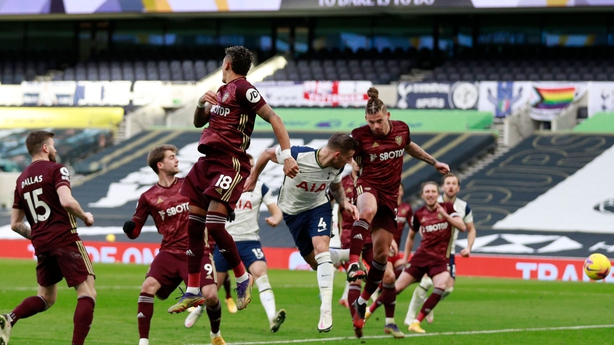 He fumbled Alderweireld's header from Son's corner at the near post and goal-line technology ruled the ball had crossed the line by millimetres, though Eric Dier converted the rebound anyway.

Jose Mourinho's side had been accused of sitting on leads in recent weeks but they did not do here as they racked up enough chances to score a hatful.

Son chose the wrong option when he raced in on goal, Bergwijn saw an effort saved by Meslier, who also kept out Kane as he tried to redeem himself.

Leeds kept on pushing for a consolation but lacked the quality to make the breakthrough as Spurs won comfortably, even though Doherty picked up his second caution in added time.