Ben Mee gave Burnley a concrete reason to celebrate amid reports of the club's imminent American takeover as his goal sent relegation favourites Sheffield United into the new year winless in the Premier League.

With sports investment firm ALK said to be on the verge of assuming control of the Clarets, Mee's first-half header paved the way for a 1-0 win and a result that provides Sean Dyche's side with a vital buffer over the bottom three.

News of a coronavirus outbreak at United had briefly raised question marks over the viability of the fixture - with boss Chris Wilder only able to name seven substitutes after two players and "four or five" backroom staff returned positive tests.

Wilder was still able to make only one change from his previous starting XI and confirmed before kick-off that he was not in favour of the game being postponed. But with two spaces unfilled on a bench that did not include Phil Jagielka or Billy Sharp, any further developments among the squad would surely spell trouble.

As it stands the South Yorkshiremen sit with a meagre haul of two points from 16 games, the first top-flight team without a victory at this point on the calendar since Bolton in 1902-03. 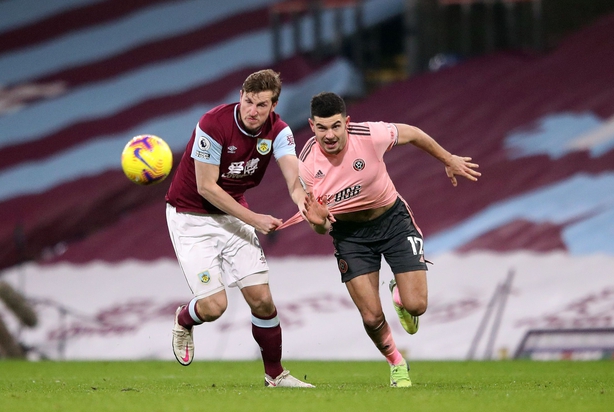 Those expecting a cagey start from the joint lowest scorers in the division, a cohort that appeared to include several members of the Blades backline, were caught wrong-footed as Josh Brownhill's long ball to Chris Wood was knocked down to give Ashley Barnes a one-on-one after barely more than a minute.

That the visitors emerged unscathed was down to the alert Aaron Ramsdale, who advanced a yard then spread himself and swamped Barnes' effort.

That early excitement soon gave way to an extended spell of scrappy play and meaty challenges, with Charlie Taylor bowing out injured after the briefest of outings and Josh Benson summoned from the bench.

McGoldrick did well to earn a corner after cutting inside Ashley Westwood and when Brewster nodded goalwards there was a big shout for handball as Brownhill blocked on the line. There seemed to be a case but referee Chris Kavanagh was unmoved and signalled for a goal-kick when another corner appeared appropriate.

United barely had time to digest their indignation when James Tarkowski launched a counter-attack, Robbie Brady whipped a cross in to Wood and Ramsdale flung out an arm to parry a bullet header. 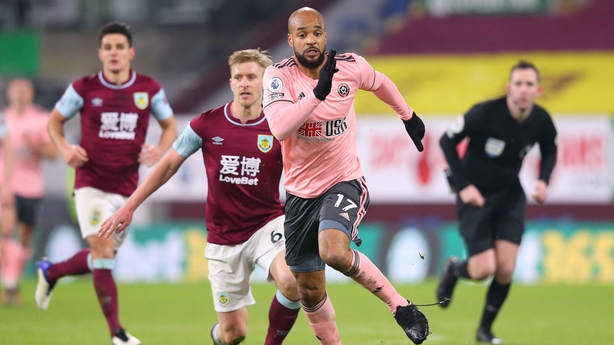 The resulting corner was the set-piece Burnley needed to barge their way in to the lead, Brady curling one towards the six-yard box where Mee slalomed in between three salmon-coloured shirts and nodded into the bottom corner. Ethan Ampadu had failed to read the danger more obviously than most and looked particularly guilty as the netting rippled.

Neither side did much to threaten the status quo before the half-time whistle but McGoldrick fashioned an opening at the start of the second period. Having squirmed in behind the defence he could not get the better of Nick Pope, who judged his angles perfectly and fended away with a firm hand.

Wilder went to his thin bench in a bid to alter things, throwing on John Fleck, Oliver Burke and Ollie Norwood in three separate changes inside a 10-minute period.

The energy levels rose appreciably, with Burnley forced back into a containing pattern, but barring one powerful strike from John Egan there was no reward for their efforts as Pope was spared any real moments of discomfort.