Everton manager Carlo Ancelotti reluctantly accepted no action being taken against Manchester United striker Edinson Cavani for a clash with Yerry Mina after he went on to score in their Carabao Cup quarter-final defeat.

The Uruguay international made the crucial breakthrough in the 88th minute and to make it worse for Everton, he was probably lucky to still be on the pitch after appearing to grab the Colombia defender around the neck.

However, with VAR not implemented until the semi-final stages referee Andrew Madley, who it seems missed the incident as it happened while his back was turned, did not take any action.

Substitute Anthony Martial then scored with the last kick of the game as Everton chased an equaliser but the damage had been done.

"We didn't talk about this at the end of the game," said the Toffees boss.

"The rules were that VAR was not in this game, if the referee decided that Cavani didn't do anything wrong we have to accept it. Full stop."

Ancelotti was more disappointed that, after his side recovered from a shaky start, they could not see it through to penalties.

"We are disappointed because it was an important competition for us," he added.

"We have no regrets because the team performed. We had a difficult start but after 20 minutes, defensively we were in control.

"In the second half we didn't give an opportunity against a team which is really strong. We performed defensively, we were good until the end, we were close to the penalties but anyway no regrets, absolutely." 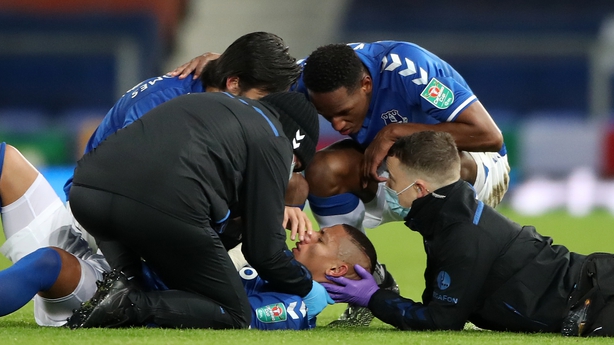 He also praised his medical staff after they prevented Richarlison re-entering the pitch after appearing to sustain a heavy head injury.

"He is fine now. He has no problem, we are going to check on him in the next few days to see what is going on," he said.

"Fortunately he was okay after the game. I think it was an unfortunate challenge, dangerous yes but I think all the players are at risk.

"Our doctor had total control of the situation and decided to take him out and I was in total agreement with him."

Richarlison tweeted after the match, saying: "To everyone who sent msg and worried, I'm fine. It was more the fright and the image that was ugly.

"Bailly apologized to me later, and it's all right. Something that happens in the game. Thank you for the affection and concern of you guys." 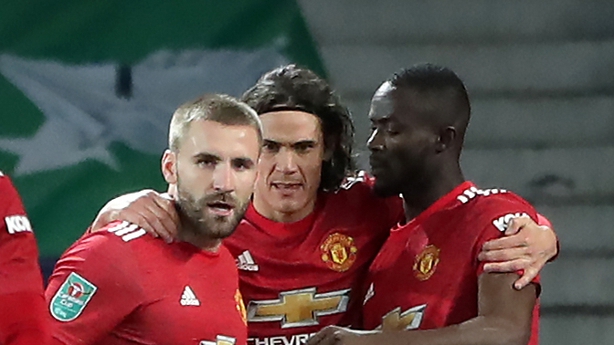 United boss Ole Gunnar Solskjaer saw his side book their fourth semi-final in the last year but knows they have to go one better than they did on those occasions last season.

"We had three semi-finals last year and it is a step not far enough," said the Red Devils boss, whose side face a repeat last-four tie against Manchester City having also lost to Chelsea in last season's FA Cup and Sevilla in the Europa League.

"This year as last year we play them in the semis so let's see how we fare.

"It was an excellent performance from the beginning. I thought we should have been one or two goals up at least.

"The first 25-30 minutes we put them under pressure and created loads of chances but you always know it will be difficult against Everton and they pegged us back in the last 15 minutes of the first half.

"We defended well and in the second half it was tight but we had a little bit of an upper hand."

Solskjaer praised Cavani for his quality and believes he has an important part to play this season.

"I'm really pleased with his influence in the dressing room, the habits he brings to training, his attitude to the game, you can see how well he looks after himself," he added.

"He has scored some very important goals for us and gives us experience.

"He was out for seven months and we have been patient with him but I think he has made a big impact."