Ole Gunnar Solskjaer’s side kicked off a crucial run of six matches in 16 days in familiar fashion at the beleaguered Blades, where this season’s run of winning away league games after falling behind extended to a sixth match.

Rashford and Anthony Martial turned things around in a first half that started with Henderson inexpiably allowing former Ireland international David McGoldrick to score, with Rashford extending Manchester United’s advantage at the end of a fine team move early in the second half.

But Chris Wilder’s men threatened a stunning late comeback, with McGoldrick netting his second before Henderson made amends for his early error by producing a superb stoppage-time save to deny Lys Mousset and seal a 3-2 win for the visitors.

Manchester United jump to sixth in the standings – just five points behind leaders Liverpool with a game in hand – after Thursday’s trip to the historically bad Blades at an empty Bramall Lane.

Henderson’s error allowed McGoldrick to score and the home team to dream, but yet again Solskjaer’s men rallied, with Rashford following a fine touch with a sweet strike before Martial’s first Premier League goal of the season turned the game on its head in the 33rd minute.

Poor goalkeeping from Aaron Ramsdale allowed Rashford to finish a sublime team move early in the second half but the rock-bottom Blades did not give up.

McGoldrick’s late goal brought a tense finish that would have ended all square was it not for a superb late save from Henderson.

It was 10th successive top-flight win on the road for Manchester United, who were on the backfoot inside five minutes in South Yorkshire.

There was no sign of danger when Harry Maguire played a return pass to Henderson but he dawdled enough for Oliver Burke to close him down and flick into the path of McGoldrick to score from close range. 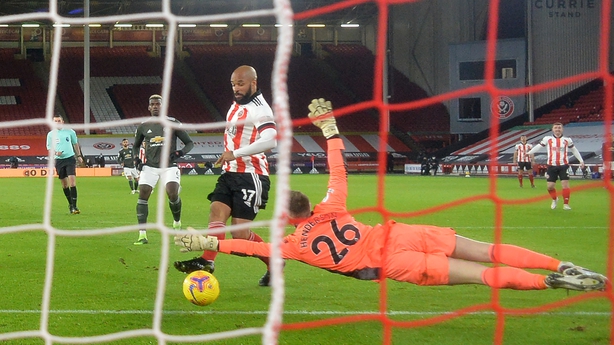 Phil Jagielka soon replaced the injured Sander Berge but the early rejig did not throw the hosts off kilter as John Fleck hit a low left-footed shot just wide.

The Blades were unsettling incoherent Manchester United, who saw Rashford lash over on a rare voyage forwards created by Bruno Fernandes' inspired ball over the top.

Rashford again got behind the home side’s backline in the 26th minute and this time made no mistake, racing onto a superb Victor Lindelof ball from his own half and taking a sublime touch before lashing home.

It was a gut punch followed by a 33rd minute uppercut. Martial was found by a delightful clipped ball into the box by Paul Pogba and Ramsdale failed to deal with his initial effort, allowing the attacker to direct home in front of the empty Kop.

The Sheffield United goalkeeper prevented Rashford from swiftly applying more salt to the wound as Solskjaer’s side upped the ante, much to the visible frustration of Wilder.

The hosts began to rebuild confidence before the break, only to fall further behind within six minutes of the second half getting under way. 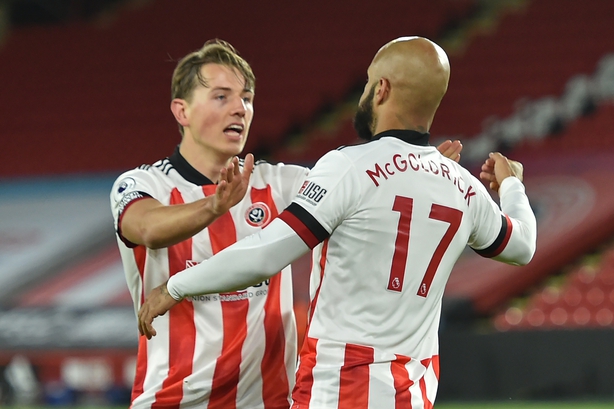 Pogba cut out a misplaced throw-in, turned smartly and produced a lovely pirouette to start a break from deep in the Manchester United half.

Referee Michael Oliver allowed play to continue when Mason Greenwood was fouled in the middle of a fine team move that ended with Rashford all too easily beating Ramsdale.

It was a poor attempted save but could not take away from the quality of the goal.

United’s attackers continued to prove a nuisance as Solskjaer’s men searched for a fourth, with Juan Mata seeing a volleyed effort blocked after Henderson dealt with a hopeful Mousset attempt.

Sheffield United would find a way past their former goalkeeper again in the 87th minute as Fleck swung in a corner and Lindelof’s header ricocheted back off McGoldrick into the goal.

And the hosts would have pulled off a remarkable comeback draw was it not for Henderson superbly thwarting Mousset in stoppage time.