Alfredo Morelos will miss the next two games after Rangers accepted a violent conduct charge.

Scottish Football Association compliance officer Clare Whyte decided a booking was not punishment enough for the Rangers striker after his clash with Mark Connolly.

The Colombian was given a yellow card by referee Steven McLean after planting his forearm into the face of the Dundee United defender during Sunday's 2-1 win at Tannadice.

But, under the SFA's disciplinary rules, Whyte had the power to take further action so long as the incident was ruled to be "exceptional in nature".

Rangers quickly admitted the charge, according to the SFA website, meaning there will be no Hampden hearing and Morelos will miss Wednesday's Betfred Cup clash with St Mirren and the visit of Motherwell in the Scottish Premiership on Saturday.

Speaking after his side's win, Gers manager Gerrard shot down claims Morelos - who has been sent off seven times since moving to Ibrox in 2017 - had elbowed Connolly.

"I didn't see an elbow," he insisted. "If you look at him again, there's no elbow there. The referee saw it and dealt with it.

"It was a foul and a yellow card and it's been dealt with. But if you look at it again, next time I see you, you'll say it wasn't an elbow." 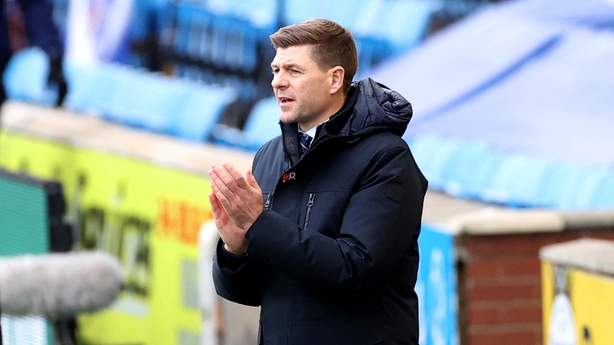 Meanwhile, Gerrard believes Morelos is ready to prove form is temporary while class is permanent as he backed his frontman to shrug off his goal drought.

The 24-year-old has not registered a league strike since September and has now gone six games in all competitions without finding the net.

He again cut a frustrated figure as he was replaced on Sunday having missed a glorious chance to end his dry spell - but Gerrard insists he still has full faith in last season's top scorer.

"It's quite normal for players to have dips in confidence or form. But what you do know is that it's only temporary and we know he'll bounce back. It won't be too long before he's scoring lots of goals and smiling even more than he is now.

"But I think one important thing to mention is that he's still doing a fantastic job for the team in terms of his hold-up play and the messages we're giving him, what he needs to do in and out of possession.

"So, just because people on the outside don't see the goals raining in, it doesn't necessarily mean that we have the same feelings towards Alfredo.

"We've been really proud of what he's given this season. He's got a lot more team-mates who are capable of helping him in terms of the volume of goals that the team needs.

"We'll do everything we can to support him and get him back to where we all need him."

"We'll do everything we can to support him and get him back to where we all need him."

Morelos had netted 26 goals by this point last season but so far this term he has only seven.

But Gerrard said: "We don't just analyse the goal return. We analyse lots and lots of different areas before we make a decision on whether he should be in the team.

"I don't think it's fair to only judge a player on goal return. There's a lot more to it than that."

Ryan Jack is also set to again be absent for the quarter-final with St Mirren.

It is almost a month since the midfielder last played despite the Ibrox boss initially declaring his knee injury would only keep him out a few days.

Gerrard said: "It's moving along but a lot slower than we'd like. He hasn't suffered a setback as such but maybe the original injury we got was maybe underplayed. The injury was maybe a little bit more serious from the beginning.

"We've tried to push him and get him back but you get signs and moments in your rehab where you've just got to come off and go a little slower.

"I don't think it will be too long before he returns but when you love Ryan Jack as much as I do, then you want him back as soon as possible, so it does feel like it's been a bit of a slow one."