Leeds' Achilles heel from set-pieces came back to haunt them again as West Ham came from behind to win 2-1 at Elland Road.

For all their free-flowing football under Marcelo Bielsa, the Whites have frequently been chaotic at the back on their Premier League return - particularly from free-kicks and corners - and Tomas Soucek and Angelo Ogbonna were beneficiaries on Friday.

Mateusz Klich had given Leeds an early advantage from the spot, but towering headers from the Hammers pair ensured the points went back to London.

Leeds coach Bielsa made headlines by naming his team in advance of the game and was true to his word with his selections, but he could not have scripted a better start as his side went ahead from a retaken penalty five minutes in.

Liam Cooper split West Ham's defence to send eight-goal striker Patrick Bamford clear and he was brought down by Lukasz Fabianski as he rounded him.

The Polish goalkeeper saved compatriot Klich's tame initial effort but replays showed he moved off his line and Klich made no mistake second time around. 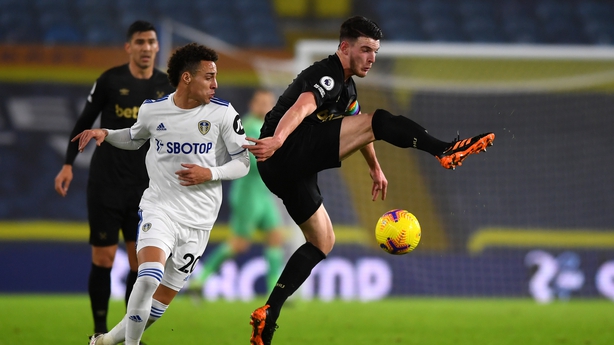 There were chances at either end after, Sebastien Haller turning and firing at Illan Meslier at one end, while Leeds forward Rodrigo should have done better with a snap-shot at the other.

West Ham levelled 25 minutes in, typically from a set-piece which has increasingly become Leeds' weakness. Jarrod Bowen's inswinging corner was met by Soucek, whose drilled header was too strong for Meslier who should have done better.

Rodrigo then spurned a chance to regain the lead almost immediately, cutting in from the right but firing straight at Fabianski.

Bamford had a header he could perhaps have done better with as half-time approached, while VAR checked for a handball against Ogbonna, but the sides went in level at the break.

Clearly irked by what he had seen, Bielsa made two Leeds changes at the break, Jack Harrison and Gjanni Alioski making way for Helder Costa and Jamie Shackleton.

Bamford then shot wide on the turn, before Luke Ayling's fine close-range block ensured Haller's shot went over, with the same player then drawing a tip-over from Meslier.

As both sides searched for a second, Said Benrahma - making his first Hammers start - put a free-kick wide from a tight angle, before causing Meslier to panic with a first-time curler from the edge of the box that was inches away.

Kalvin Phillips tried to make something happen for Leeds and drove wide, while Fabianski pouched a stinging 25-yard Klich half-volley.

Pablo Fornals then missed Meslier's far post by centimetres as he crept in round the back of Cooper's failed attempt to clear, before the keeper made a quite stunning one-handed stop to repel Fabian Balbuena's rocket header.

He had little chance in the 80th minute, though, unable to get anywhere near Ogbonna's header which came from an inch-perfect Aaron Cresswell cross after a sloppy Costa foul.

There was still time for Meslier to deny Haller with a another one-handed cracker and Balbuena clip a post, though Leeds should have levelled when Rodrigo headed meekly at Fabianski.