The nominees for the 2020 SSE Airtricity/Soccer Writers' Association of Ireland awards have been announced, with Shamrock Rovers manager Stephen Bradley and star midfielder Jack Byrne in line to battle it out for the main honour.

The Personality of the Year and Goalkeeper of the Year awards will be presented at a virtual awards ceremony on Monday.

In the Personality of the Year shortlist, the six nominees consist of four managers and two players, all of whom enjoyed memorable seasons in the SSE Airtricity League.

Hoops boss Bradley led his side to the Premier Division title, enjoying an unbeaten league season, while Keith Long guided Bohemians to second place in the SSE Airtricity Premier Division and a return to European football.

Ollie Horgan masterminded a fine season for Finn Harps which saw them secure their Premier Division status automatically, and they will be joined in the Premier Division next year by Drogheda United, who won promotion as First Division champions under manager Tim Clancy, who has also been shortlisted for the award.

The shortlist is completed by Byrne - who this season became the first League of Ireland player to play a senior competitive Irish international since 1985 - and Dundalk captain Chris Shields, who led Dundalk to the FAI Cup and the Europa League group stages.

Shamrock Rovers and Drogheda are also represented in the Goalkeeper of the Year award, along with Sligo Rovers.

Alan Mannus was an ever-present for Rovers’ unbeaten league season, keeping 13 sheets in 18 games and separately made the crucial save in his side’s epic 13-12 penalty shootout win over Ilves in the Europa League qualifiers. 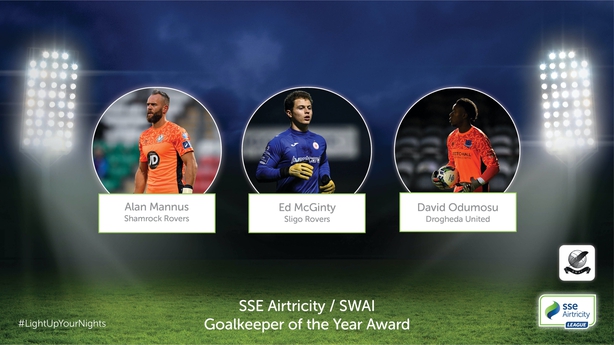