Son Heung-min and Harry Kane powered Tottenham back to the top of the Premier League with a 2-0 north London derby win over Arsenal, whose miserable start to the season continued.

Son and Kane set each other up for first-half goals, meaning they have now combined for 12 goals this season, their lethal partnership stretching Spurs' unbeaten record in the league to 10 games, going back to the opening day of the season.

In front of 2,000 fans at the Tottenham Hotspur Stadium, the South Korean opened the scoring in the 13th minute with a wonder strike, curling in from 25 yards, before Kane became the highest scorer in the history of north London derbies when he netted his 11th goal against the Gunners on the stroke of half-time.

Having done the hard work in the first half, they then put in a trademark Jose Mourinho rearguard performance after the break to ensure they have now gone 301 minutes since conceding a league goal.

And, whatever Mourinho may say, those sort of numbers make Spurs every bit the title contenders this season.

In contrast, Arsenal's worst start to a campaign since 1981/82 got no better as they slipped to a fourth defeat in six games.

Mikel Arteta, who is finding himself under increasing pressure, will be looking on with envy at what Mourinho is building in the white half of north London as his side slipped 11 points behind their rivals.

It helps that Mourinho has Son and Kane to call on and it was the tried and trusted partnership that put Spurs ahead in the 13th minute.

Some superb hold-up play from Kane saw him wriggle free and set Son clear, but it was all the South Korean's work from there.

He advanced down the left before cutting inside and sending a curling 25-yard shot into the top corner for his ninth goal of season - and by far his best.

It was also his eighth goal in all competitions that Kane had assisted.

Spurs were getting joy down the left and, after Sergio Reguilon had a cross cleared, Pierre Emile-Hojbjerg stung the palms of Bernd Leno with a shot from distance.

Arsenal were by no means being outplayed as they enjoyed the majority of the ball but struggled to create anything clear-cut.

They were building a spell of pressure before the break, but Spurs cut them open with an incisive counter-attack.

A Serge Aurier clearance gave the hosts a four-on-three advantage, which then became four on two when Thomas Partey pulled up injured, and they made it count as Giovani Lo Celso slipped in Son, who repaid the favour to Kane.

He teed up his team-mate, who smashed the ball past Leno from close range.

Arsenal tried to mount a response in the second half and finally created some chances as Alexandre Lacazette's header went straight to Hugo Lloris, before Pierre-Emerick Aubameyang headed over.

Spurs were inviting pressure and the Gunners accepted, albeit without really threatening to get back into the match.

Lacazette forced Lloris into another smart stop with a header from Hector Bellerin's cross, but chances were hard to come by as Spurs defended superbly, with several last-ditch tackles and blocks.

It meant, in the end, Spurs saw the game out with ease, allowing them to enjoy bragging rights from their lofty perch at the top of the table. 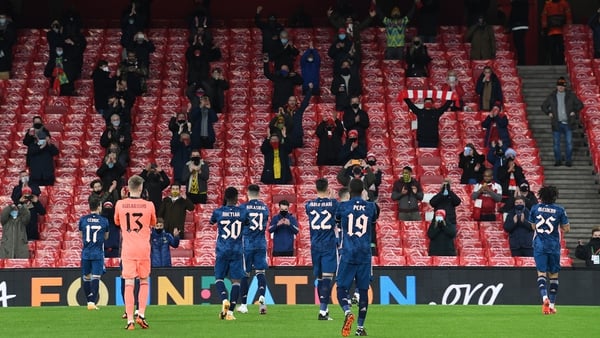