Manchester United manager Ole Gunnar Solskjaer said that their quality simply showed in the second half as they came from behind to defeat West Ham 3-1.

Second-half goals from Paul Pogba, Mason Greenwood and Marcus Rashford saw United come from behind to snatch all three points after Tomas Soucek had put the Hammers ahead at the Olympic Stadium.

It is now five wins from five away matches for United - and they have fallen behind in all of them.

Solskjaer said: "There's loads of things that decide a game of football.

"In the first half we had loads of the ball but couldn't create anything, In the second half we tweaked things tactically, made the space bigger for Bruno in the middle, and the three goals were all excellent quality.

"That was the difference I would say, the quality we had in the second half was too high."

It wasn't a view shared by opposite number David Moyes who blamed a poor refereeing decision for the defeat.

Hammers boss Moyes insisted the ball had gone out of play by at least two yards in the build-up to Pogba's equaliser, when United goalkeeper Dean Henderson cleared upfield along the touchline.

"I probably had the best view in the house, the ball went over my head and I'm a couple of yards off the pitch," said Moyes.

"I'm disappointed the linesman didn't pick it up. He didn't make a decision on that at all. Maybe he was looking for an offside, but I would have said his first job was to check the ball hadn't gone out of play.

"The players reaction tells you the ball was out. I certainly feel it had a big part to play in the game.

"We never regrouped and got ourselves correct and we need to put that right."

The Hammers led at half-time through Soucek, and could have been further ahead but for some dubious finishing.

Sebastien Haller was the chief culprit when rounded Henderson, only to somehow stumble over his own feet instead of rolling the ball into an empty net.

Moyes added: "We had great opportunities to go 2-0 up, maybe more, but we didn't kill it off.

"We didn't show a clinical edge to our finishing and that was costly for us tonight."

It meant the 2,000 West Ham fans inside the London Stadium, at the first Premier League match to have supporters present since March, went home disappointed.

Moyes said: "I thought the supporters were really good and I'm disappointed we couldn't give them the result to go with it, but they were noisy."

It was Bruno Fernandes, a half-time substitute, who turned the match in the visitors' favour by having a hand in all three goals

The equaliser arrived in the 65th minute when Fernandes collected Henderson's clearance and fed Pogba, who beat Lukasz Fabianski with a superb strike from 20 yards out.

With West Ham reeling United took the lead, and Fernandes was involved again, his backheel finding Alex Telles who whistled in a low cross for Greenwood to take a touch, spin and fire home.

Then Rashford was played through by Fernandes only to place his shot against a post, but the England man made no mistake 10 minutes from time.

Fernandes flicked the ball square to Juan Mata who found Rashford racing through again to round off the victory in style. 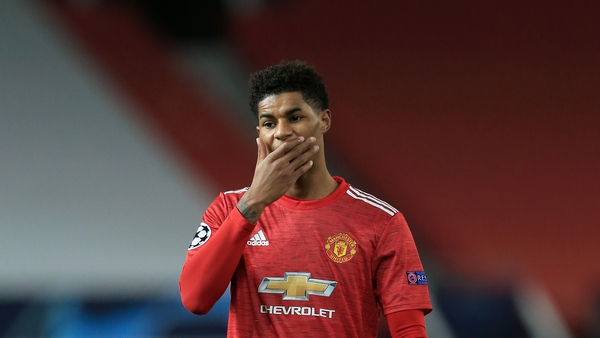