Republic of Ireland midfielder Robbie Brady struck early for Burnley but they had to settle for a 1-1 draw with Everton as Dominic Calvert-Lewin continued his sensational start to the season.

The Toffees had lost four of their last five Premier League matches, including a 1-0 defeat against Leeds last time out, and they were caught cold at Turf Moor as Brady gave the Clarets a third-minute lead after an Allan error.

Allan was able to atone for his mistake and had a hand in Calvert-Lewin bagging his 11th goal of the campaign on the stroke of half-time, after which both sides had chances to go on and claim all three points.

However, Burnley's Nick Pope and Everton's Jordan Pickford, rivals for the number one spot with England, made some brilliant saves as it finished a draw between the sides for the first time in the Premier League.

Everton were on the front foot for large spells in the second half but Burnley defended stoutly on manager Sean Dyche's 200th Premier League game in charge as they bounced back from last week's 5-0 hammering at Manchester City.

A point here keeps them in the relegation zone and Dyche may feel it a case of two points dropped after they flew out of the traps in the wintry sunshine.

Brady made an instant impression on his return from injury, lashing a right-foot shot into the bottom corner from 25 yards after Allan's loose pass on the edge of the box had been intercepted by Ashley Westwood.

It was an unconvincing start from Everton, with Allan particularly sloppy, but Calvert-Lewin served notice of his intent, stretching to make contact with a cross only for Pope to make a fine reaction save with his knees.

The Burnley goalkeeper was given the all-clear after missing the thrashing at Manchester City because of concussion and he was called into action again, this time easily dealing with Richarlison's effort from an acute angle.

Josh Brownhill drilled wide after wriggling free from Abdoulaye Doucoure while Chris Wood should have done better after being put clean through, with Everton goalkeeper Pickford reacting quickly and saving excellently.

But Everton, who were forced into a change after Fabian Delph pulled up with what looked like a hamstring injury on his second league start this season, levelled moments before the interval.

Burnley's appeals for a foul on Westwood by Allan fell on deaf ears and the Brazilian teed up compatriot Richarlison, whose cross from the left was turned in by a sliding Calvert-Lewin.

Everton carried on where they left off on the resumption and only a fingertip save from an fully extended Pope kept James Rodriguez's curling left-foot effort from finding the top corner.

Brownhill deflected a Richarlison ball on to the roof of the net as Everton managed to keep Burnley on the back foot although the home side were able to soak up a sustained spell of pressure from their opponents.

Wood landed awkwardly and had a head injury assessment but he was cleared to continue and the New Zealander was soon back into the thick of the action, with Yerry Mina's toe-poke keeping the striker from latching on to a cross.

The Burnley man's free header from a corner was then kept out by a diving Pickford moments after Pope saved well with his legs from Calvert-Lewin in a see-saw end to the game.

Substitute Gylfi Sigurdsson had an excellent opportunity to claim the win for Everton at the death but Pope was once again equal to the effort as the spoils were shared. 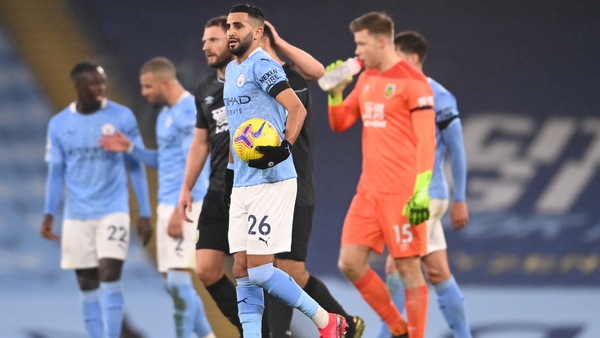