Jurgen Klopp has admitted that he faces a dilemma in choosing between Caoimhin Kelleher and fellow deputy Liverpool goalkeeper Adrian for Sunday's Premier League clash against Wolves.

With established number one Alisson Becker still out with a thigh problem, Ireland's Kelleher is in contention to make his Premier League debut ahead of his Spanish counterpart Adrian.

The Cork native was the surprise deputy for Tuesday's Champions League victory over Ajax and impressed with a number of key saves on the way to keeping a clean sheet.

"A big call, yes but thank God it worked out. That's not always the case. But that's good and we will see," said Klopp of Tuesday's outcome.

"Caoimhin is a sensationally talented goalie: now he got the chance and I think he convinced everybody.

"But Adrian doesn't deserve just to be written off now, there's no reason for that. He supported Caoimhin in an exceptional way after he got the information that he would not start, he behaved unbelievably.

"There are not a lot of reasons I could mention in this moment to say he will not start against Wolves, but there is training in between and other things, he has to stay fit, we have sessions.

"But he has done enough to convince me, but he did that already months and years ago."

The Liverpool manager also warned England boss Gareth Southgate he will have a problem for Euro 2020 as he will "get what he is given" by Premier League clubs if the current three-substitute rule persists.

Klopp has been the most vocal proponent of a return to having the option to make five changes during a match, in line with what happened after lockdown ended last season.

However, despite him and a number of other managers supporting the move there was no vote on it at this week's Premier League meeting.

"I'm not surprised. I told you that in the managers' meeting if we would have voted that day, which we were not allowed to, it would have been through 100% with 15 or 16 votes," he said. 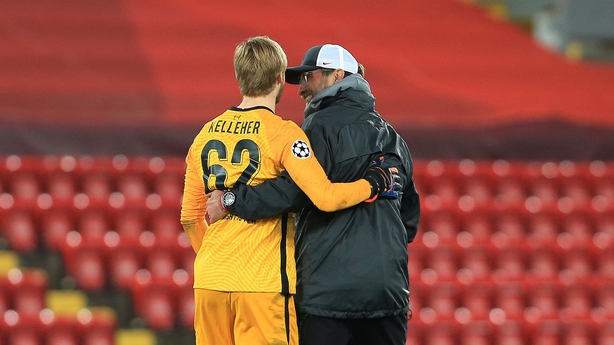 "That it didn't happen since then is a sign some shareholders and CEOs and sporting directors see differently from their managers.

"That is not a good sign, really, to be honest. These people now really ignore player welfare.

"Now pretty much all teams have to play every three days, it will be massive for everybody from now on and every team will feel the difference.

"And next summer it will become a problem for Gareth Southgate. Most of the players Gareth wants to pick play (European) football, pretty much all.

"I heard now Gary Neville said I didn't understand it. I can't remember what he said exactly but it's not about Liverpool," he added.

"Whatever he thinks is maybe evidence of of how he would do it, how he would deal with a situation like that.
"But he cannot, or should not think I am like him because I am not like him. I speak about all the players."

Having admitted in recent weeks he would not even had the personnel to make five changes in a match such was their injury problem Klopp is optimistic reinforcements are just around the corner.

Right-back Trent Alexander-Arnold, who has missed four matches with a calf strain, and Naby Keita, out for three with a hamstring problem, could be back for Sunday's visit of Wolves.

"Trent and Naby will make their first steps in team training today," said the Reds boss.

"There's a chance that Naby and Trent could be in the squad I would say, whether they can start or play 90 minutes I do not know."

Klopp also had some good news on Alex Oxlade-Chamberlain, who has not played since a knee injury in pre-season.

"He does the warming-up with the team now, some ball work, and we will develop that over the coming days and weeks and we will see what moment it makes sense to throw him in. He's not far away," he added.