Brighton boss Graham Potter has urged Republic of Ireland striker Aaron Connolly to be "nicer" to himself as he attempts to make his way in the Premier League and on the international stage.

The 20-year-old passed up a glorious opportunity to fire his side ahead against champions Liverpool last weekend having endured a frustrating spell with the Republic of Ireland on and off the pitch in recent months.

Connolly's disappointment was clear, but Potter is adamant that he and all of the club's emerging talents will only be better players for the hardship they go through during their formative years in the professional game.

Asked if he needed to work with the the young Irishman, who will hope for another chance against Southampton on Monday evening, to ensure he is not too hard on himself, he said: "Yes, I think you do, and he's not the only one.

"It's a constant message. It's the setbacks, it's the mistakes, it's the failures - they're the things that actually define you and make you better because if you learn from them, you can use them to grow.

"They miss passes, they let goals in, they don't take their chances - that's how it is. The quicker you understand that, the nicer you are to yourself and that's the important thing." 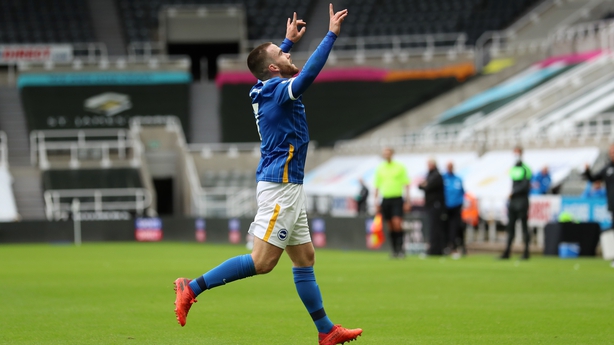 Connolly announced himself in style in October last year when on his first Premier League start for the club he scored twice in a 3-0 victory over Tottenham.

The following week, then Ireland boss Mick McCarthy handed him a senior debut as a substitute in a goalless Euro 2020 qualifier draw in Georgia and was so impressed that he included him in his starting line-up in Switzerland three days later.

However, things have become a little tougher for Galway native since, and he has just one goal to his name for club and country so far this season having suffered the intense disappointment of being ruled out of Ireland's play-off semi-final showdown with Slovakia at the last moment because of what proved to be a false positive coronavirus test.

Potter said: "It's so difficult because the level is so punishing and players really ultimately have to go through a process where it's not going to be perfect sometimes and they have to be able to deal with that.

"That's ultimately the biggest challenge, but I think it's also the most rewarding one as well. We're fully behind him and we understand his quality and we're looking forward to helping him improve further."