Manchester United manager Ole Gunnar Solskjaer defended his decision not to take off Fred and instead blamed the lack of clinical finishing from his strikers for their 3-1 Champions League defeat to PSG at Old Trafford.

Neymar struck twice for PSG while United wasted several chances when the scores were level at 1-1 after Marcus Rashford’s equaliser.

United's Brazilian midfielder Fred was sent off in the 70th minute after a first-half booking for an off-the-ball head-to-head clash which had made him a likely candidate for a half-time substitution.

Solskjaer said he had considered replacing the Brazilian but felt the dismissal was harsh.

"Fred has played really well. We spoke about staying calm and on your feet. The second yellow card was nowhere near a foul. Ander (Herrera) knows that," he said.

"It was a very good game which deserved fans. With a bit more clinical finishing we should have finished the game. They were there for the taking.

"We had some big chances. The difference when you get to the big games is the clinical moments." 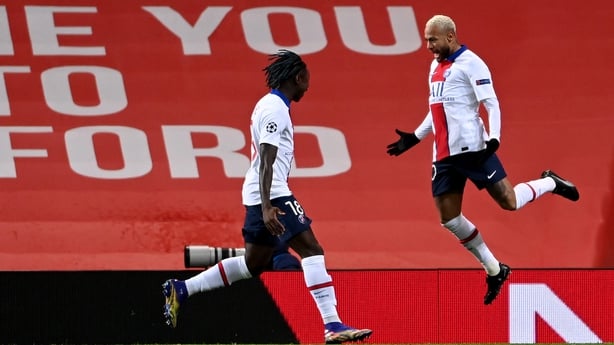 United, PSG and RB Leipzig are now level on nine points with Solskjaer’s side facing a tricky test in Germany on Tuesday.

"The destiny is still in our hands. If we go to Leipzig and win the game we go through. We want to be in the Champions League and we need to show that next week with a good performance," he said.

United captain Harry Maguire felt his team had been unlucky.

"We had better chances. Their two goals are scrappy goals - ricochet and pinball around the box. I feel we deserved something," he said.

"You’ve got to take your chances and not give away soft goals. But we’re still in control of going through to the knockout stages."