Republic of Ireland striker James Collins helped to ensure leaders Norwich slipped to their first defeat in almost two months as they were beaten 3-1 at Luton in the Sky Bet Championship.

A goal from Matty Pearson and a penalty from Collins secured victory for the Hatters at Kenilworth Road after Norwich's Emi Buendia had cancelled out George Moncur's opener.

The game was one of six in the English Football League tonight to welcome back supporters and they seemed to inspire the home side as they denied Norwich a way back into the contest.

Watford and Reading failed to take full advantage of the Canaries' slip-up - although they moved within a point of the top - as they were held to draws by lowly Nottingham Forest and Sheffield Wednesday respectively.

Watford had a to settle for a goalless draw at the City Ground while the Royals' clash with the 10-man Owls at Hillsborough ended 1-1.

Callum Paterson put Wednesday ahead after 13 minutes but the dismissal of Liam Shaw on the half-hour hampered their chances. Lucas Joao levelled before the interval but the visitors were unable to force a winner. 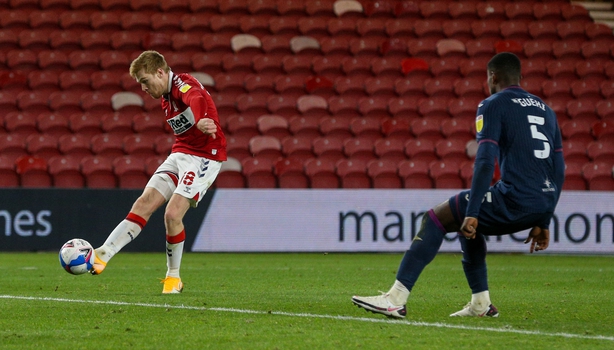 Watmore, who joined the club on a short-term deal last month, scored a deflected opener after 26 minutes and added a second midway through the second half. Swans substitute Yan Dhanda pulled one back 12 minutes from time but Boro held on.

Adam Armstrong hit a 90th-minute winner as Blackburn Rovers snatched a 2-1 victory over Millwall at Ewood Park. On-loan Liverpool midfielder Harvey Elliott and Scott Malone had earlier traded goals in the first half. Troy Parrott started for Millwall; he was replaced in the 77th minute.

Nick Powell made it an unhappy night for the fans admitted at Adams Park as he scored the only goal in Stoke's 1-0 win over Wycombe.

Powell netted in the 72nd minute to leave the Chairboys, with just two wins since earning promotion, in the bottom three.