Neil Lennon admits he would have understood if Sunday's defeat by Ross County had ended his reign as Celtic boss.

The Northern Irishman came under increasing pressure following the 2-0 Betfred Cup loss which saw hundreds of fans turn up at Parkhead afterwards to demand the removal of their manager, amid scenes of chaos as police tried to keep order.

The Hoops have won just two of their last 10 matches in all competitions and sit 11 points behind Rangers at the top of the Premiership, albeit with two games in hand, as they bid for their 10th straight title. They are also out of the Europa League with two group games remaining.

However, Celtic chief executive Peter Lawwell on Tuesday night gave his backing to Lennon, who is now preparing for Thursday's European dead rubber against AC Milan at San Siro.

Asked if he thought in his heart of hearts that it was over for him on Sunday, the former Celtic captain, in his second spell as Parkhead boss, said: "Not in my heart of hearts, but I could understand if that would have been the case, yes.

"I am very grateful [for the board's backing]. They are not a board that sack managers for the sake of it.

"We have had great success, we are going through a tough time but they don't leave you out in the lurch. 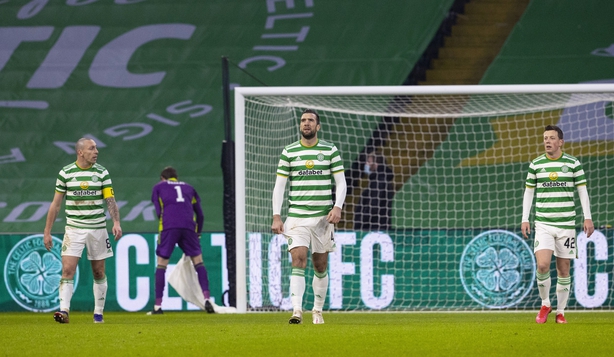 "It is really encouraging and comforting and I have had great support from the players as well.

"From my own point of view, for 20 years I have done everything in my power to bring success to the club and the fans.

"That is not going to change on the run of a bad month or people being upset by my style of management if they want to say that.

"I owe it to the players, they are working hard to turn it around and they are feeling it at the minute so they need my support as well."

Shane Duffy will have a knee injury assessed ahead of the trip to AC Mlilan. Fellow defender Christopher Jullien has played two games after a long spell out injured with a back problem and is a doubt.

Mohamed Elyounoussi will not be available through injury and James Forrest remains sidelined after ankle surgery, but defender Jeremie Frimpong returns after being suspended for the Ross County game. Celtic meanwhile have said that they will investigate the "unacceptable" behaviour outside their stadium on Sunday.

The Parkhead club revealed some players were left "shaken" after being targeted by missiles while footage showed some fans kicking down and throwing barriers.

No arrests were made and the three injured police officers did not require medical attention, but Lennon said: "On the scenes on Sunday, we are disappointed, we are hurt.

"I understand the frustrations of the supporters because ultimately we are not in a great run at the minute.

"But it serves no purpose, particularly for the players.

"I am old enough to take criticism and abuse - some of it is justified, some over the top. That is the role of the manager and that is the responsibility you have to bear.

"The players are definitely determined to turn things around.

"They are hungry. They have felt the wrath of the supporters, if you want to call it that. It surprised some of them, it shook a few of them up.

"But they want to put things right for them and the club and themselves as well. We have to find that little extra zest and zing.

"When the goal went in on Sunday, a few of them came to me and said they felt a little deflated afterwards and that's not normal for them, that's not like them.

"So we have to react better."