Ireland's dream of reaching Euro 2022 ended at Tallaght Stadium as Vera Pauw’s side were beaten 3-1 by Germany in their final qualifying encounter.

The world number two ranked side made their early pressure count as they took a commanding 2-0 lead after 29 minutes.

Ireland gave themselves a chance just before the break as Katie McCabe converted a penalty, however, a late third from the visitors ended the home side's hopes despite a truly plucky performance, most notably in the second half as they fought gamely to get a result.

Germany showed their credentials from the opening minute as they attacked at pace from both flanks and through the middle, putting pressure on the Ireland goal with two early corners.

Ireland coped without too much concern, while a couple of well-hit efforts from distance did not threaten – Louise Quinn putting her body in the way of Svenja Huth's blast from just outside the box.

Katie McCabe’s marauding run in the early exchanges was the best that Ireland could muster; the captain’s stinging delivery from wide out left just evaded the arriving Denise O’Sullivan and Heather Payne.

Fifteen minutes on the clock and Ireland were coping admirably, with surprise-choice keeper Grace Moloney yet to be tested on her first competitive start for her country, while the manager’s brave move to start with two strikers was not leaving too many gaps and gave Ireland and interesting outlet up top.

Moloney was called into action in the 17th minute with a testing ball in from the right, however, the Reading stopper came and collected to prevent the danger, looking composed and assured.

But the Irish task became a lot tougher in the 20th minute as McCabe adjudged to have fouled Huth and the referee was quick to point to the spot, despite the skipper’s protestations – the German dangled her leg looking for the contact and convinced the referee.

Lina Magull stepped up to strike the spot-kick and slammed it right in the bottom corner, just beyond Moloney who had gone to her left but was beaten by the pace.

Ireland had no immediate answer and it was the Germans who enjoyed the next chance as Tabea Wassmuth raced clear, however, the alert Moloney cleaned out the danger taking ball then player, leaving the German forward prone on the Tallaght turf. 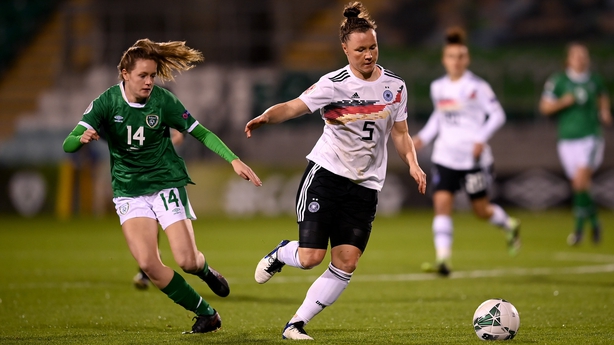 But the inevitable occurred in the 29th minute as yet another German attack heaped pressure on the Irish penalty box.

Lovely play from the classy Linda Dallman outside the box, as she skipped through with ease, before slotting an inch-perfect ball through to the advanced Huth. The ball squared to the back post as Wassmuth arrived to force a fine save from Moloney.

However, the 1899 Hoffenheim forward picked up the loose ball, played a neat one-two, before placing her shot beyond the Irish keeper into the far corner of the net.

Ireland barely got out of their half and the Germans could have gone further ahead with a bit more precision. A couple of close calls threatened but Ireland just about kept in touch.

The home side, however, were handed a lifeline a minute before half-time.

A great break from just inside the German half as Rianna Jarrett raced clear before rolling Payne in on the right side of the box.

The Florida State Seminoles striker got to the byline before cutting back for the arriving O’Sullivan, who was chopped down as she checked her run. The referee again was decisive and pointed to the spot.

McCabe missed a vital spot-kick in Kyiv in October but stepped up again and placed a beauty into the top left corner – the first goal Germany have conceded in eight games.

More of the same from the visitors as Germany again took control early in the second half and they were the width of the woodwork away from adding their third in the 55th minute as Wassmuth crashed a fine effort off the bar from outside the box.

Amber Barrett was duly sent on for Ireland to add energy into the attack, replacing Jarrett, with plenty of time to make an impact following a fine spell of goalscoring in the German league, where she plays for Cologne.

And Ireland spurned a great chance to restore parity in the 62nd minute as O’Sullivan broke through the middle of the retreating German defence.

A ball squared to Ruesha Littlejohn who in turn rolled it further left to McCabe, arriving at the edge of the box with a clear look at goal. But this time the Arsenal midfielder sliced her shot, missing at the near post, when really the ball had to at least go across the face.

Moloney was again called into action in the 67th minute and she kept her side in the game, getting down well to stop a well-struck Magull effort from just outside the box.

Into the final 15 and Ireland were still in contention to hold onto their second place in the group as Ukraine were being held by Montenegro, yet Pauw’s side needed to get back on terms.

A couple of corners bounced around the German box but the Irish were unable to test Ann-Katrin Berger’s goal, while Ellen Molloy was sent on to try to make a difference for the final 12 minutes with Louise Quinn told to move into the centre-forward position.

But thousands of miles away in Kyiv, Ukraine had taken a late lead, which left Ireland needing a victory to keep their hopes alive.

Ireland threw everything into the final stages in the knowledge that gaps were being left at the back as they went in search of an equaliser.

But it was the Germans who would wrap it up in the 85th minute as Wassmuth added her second of the game with a sweet strike into the far corner, having cut in from the left to hammer home.

So Pauw’s first campaign ends in a case of what might have been, and the team will rue that away defeat in Kyiv, which handed them what turned out to be an impossible task to overturn the word class German outfit.