Sergio Aguero has not returned to training ahead of Manchester City's Champions League trip to Porto on Tuesday but manager Pep Guardiola maintains the problem is not serious.

City's record goalscorer missed Saturday's 5-0 thrashing of Burnley in the Premier League with what was described as a minor "disturbance" in his knee.

The striker underwent knee surgery in the summer and his comeback this season has already been complicated by a hamstring injury.

He returned as a late substitute in last Wednesday's victory over Olympiacos but City do not want to take undue risks with the 32-year-old. 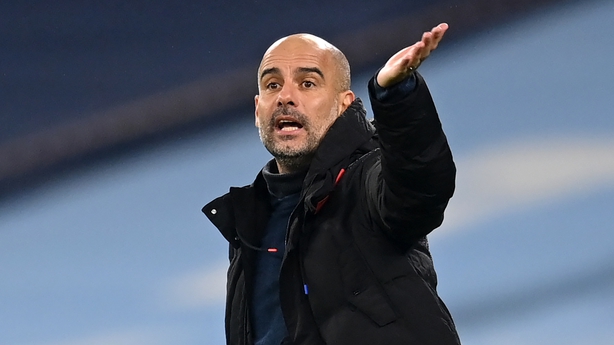 He now seems unlikely to be involved as City, who are already qualified for the last 16, face Porto in their next Group C game.

Speaking at his pre-match press conference, Guardiola said: "I am not concerned. He did not train. He had a little disturbance in his knee. It is nothing serious but he didn't train."

City have won their first four games in the group and securing top spot is all that is riding on the remaining two fixtures.

It could be an opportunity for Guardiola to rest players as he focuses on the Premier League but he insists he will not rotate his squad for the sake of it.

"There are a lot of games but I don't want them to feel this is rotation. Every game is played because the best players, for many circumstances, we believe are focused on a specific game."

Guardiola hit back at Porto boss Sergio Conceicao's criticism of his behaviour.

Conceicao accused Guardiola and has backroom staff of attempting to influence officials following the first Group C meeting between the two clubs at the Etihad Stadium in October.

"I've got a lot to learn from Pep Guardiola in the way he pressures referees, talks to opposition players and the opposition dugout," said Conceicao after City came from behind to win 3-1.

"We were angels compared to the other dugout."

Guardiola insists he has never acted in such a way throughout his managerial career.

"I'm not agreeing. It's his opinion but I don't agree. We didn't pressure the referee," he said.

"History speaks for itself. We are not this type of team to do this kind of thing.

"I would admit if there's an action you do not agree (with) you can make any comment with the assistant referee but that's one specific action. It's not a part of who we are.

"The five years we are here - and before then in Germany or Spain - our behaviour speaks for itself. I'm just saying I don't agree. It's not true."

City are hoping to maintain momentum after their impressive performance at the weekend.

"It was a good game from the whole team. We totally neutralised Burnley," said goalkeeper Ederson.

"We scored five and had a lot of chances to score more. Hopefully we can go in with the same mindset against Porto.

"We know it is going to be a very difficult game but we hope we can achieve the same momentum."